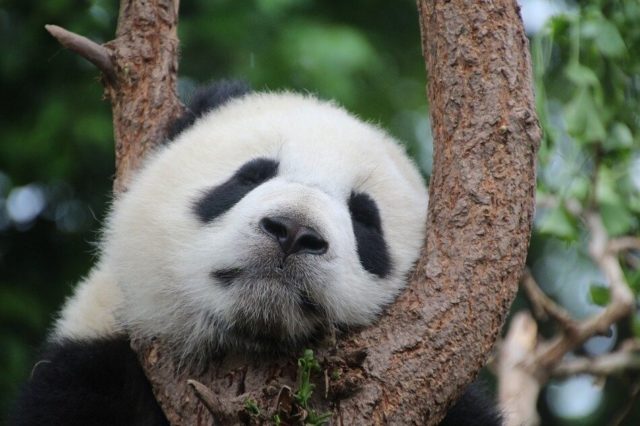 The 10 Largest and Most Beautiful Zoos in Europe – Official Ranking

Oscar Wild once said that every man lies but if you give him a mask, he’ll be sincere. Do you agree with that?

Well, it may not be a feast of sincerity but the carnival is definitely the feast of feasts. And, Italy is best known for its carnivals, especially the Carnival of Venice. This year, the Carnival starts on February 20th (Fat Thursday) and ends on February 25th (Fat Tuesday). Rich in tradition and history, it finds its roots in the Greek Dionysian or the Roman Saturnalia, and today it has different connotations in every country.

As already said, Italy is very popular for its carnivals, but which are the most famous ones?

Let’s look at the most beautiful carnivals in Italy in 2021 and see if the Carnival of Venice is still in the first place.

It’s a historic carnival in Sicily, one of the oldest on the island, characterized by a surprising production of allegorical floats in terms of number, manufacture, and size. From the initial parades of wagons with cattle, over the years there has been a sharp political satire. Between celebrations and parades of floats, from Saturday to Tuesday, the previous Thursday begins with the delivery of the keys to the Carnival King, represented here by Peppe Nappa. On the day that the carnival closes, the mask, which parades around the city distributing sausage and wine, is burned in the square.

Considered one of the most beautiful carnivals in Lazio, the one of Ronciglione is full of events, parades, and traditions. It begins with the Cavalcade of the Hussars, which evokes the defense by these knights of the Papal State; continues with the “Corse dei Barberi”, also known as “Empty races” as it’s horse racing without jockeys; finally, there is the “Pilatata dei Nasi Rossi” celebration which really stands out  The Red Noses are masks which represent the devotees to Bacchus, the god of wine. They are irreverent figures who, in the pilatata, praise songs in favor of wine, the table, and the crazy life. And, to engage the audience, they offer steaming macaroni … inside a chamber pot!

Mask: Hussars and Red Noses
Main events: Ride of the hussars, races of the barbers, the pilatata
Accommodation: hotels and b & b from € 30.00 per night – see the offers

Respecting the peasant traditions, the “Transhumance of masks” takes place in Tricarico. It’s because the masks have the shape of Bulls and Heifers, all with a cowbell around their neck and guided by the “Vaccaro”. The herd in transhumance crosses the village, the nobles join the procession, and everything ends with the parade of floats, in which the Carnival puppet is burned and “Quaremma” (Lent) mourns his death.

Mask: Bulls and Heifers
Main events: Transhumance of masks, destruction of the carnival, and weeping of Quaremma
Accommodation: Hotels and b&b from €40 per night

In the San Bernardo Valley, the municipalities celebrate the Coumba Freida Carnival, which literally means “Of the cold valley”, where the passage of soldiers following Napoleon is commemorated. The masks are the “Landzette”, with uniforms reminiscent of the Napoleonic ones of the 1800s and wooden masks. They also hold horsehair and a bell in their belt.

Twinned with the most beautiful Carnival in the world, that of Rio de Janeiro, it’s characterized by allegorical floats hoisted over 20 meters in height. But the real feature is the tradition of revenue, which has little or nothing to do with the fiscal one, but which instead consists of throwing of objects and gadgets such as balls, soft toys, etc. by the ones above the moving wagons.

Mask: Tasi, a 19th-century character from Cento, a lover of good wine
Main events: parade and the procession of floats with the revenue; “Rogo di Tasi”, which after opening the parades dressed in a tailcoat and accompanied by a fox, is burned on the last day
Accommodation: Hotels and b&b from €40 per night

It’s the oldest carnival in Italy and one of the oldest in the Old Continent, with the first document dating back to no less than 1347.

Here, too, as in Cento, the characteristic is the “jet”, a shower of sweets, chocolates, and candles that are thrown from the floats on the public.

The entrance to the perimeter of the delimited area for the carnival may be subject to a fee.

Mask: the baby “Vulon”
Main events: The concert of the “Musica Arabita” band, which plays objects such as tin cans, pitchers, coffee pots, etc.; the parade of the Great Masked Courses, with allegorical floats, folkloric groups, and musical performances
Accommodation: Hotels and b&b from €30 per night

Magical and old-fashioned atmospheres in the Habsburg Carnival, which transforms Madonna di Campiglio from a ski capital to a princely carnival city. More than a 19th-century outline, a real dive into the past with the imperial couple formed by Princess Sissi and her consort Francesco Giuseppe who parade with a procession of ladies and knights.

Mask: Princess Sissi and Francesco Giuseppe
Main events: Inaugural parade with the arrival of the imperial couple; Grand Ball of the Emperor at the Hofer hall of the Hotel Des Alpes
Where to sleep: Hotels and b&b from €70 per night
Reservations: info@campigliodolomiti.it / +39 0465 447501

The Carnival of Sant’Ambrogio has a somewhat original development in the sense that it begins when all carnivals end. In fact, Shrove Tuesday doesn’t mark the end of the carnival here, which is postponed by a week. This is because on one occasion, precisely at the time of Sant’Ambrogio, before starting the Lenten rites, the citizens wanted to wait for the bishop of Milan who was returning from a pilgrimage.

The Carnival of Mamoiada is a carnival in a full Sardinian style, with the more than characteristic masks of the Issohadores and Mamuthones. What are these masks characterized by? Well, the Issohadores wear red bodices, white masks, caps, and a small shawl, and escort the Mamuthones which wear sheepskin and wooden masks and carry “sa carriga” (heavy bunches of bells) on their backs. These cowbells weigh no less than 30 kg.

Mask: the Mamuthones and the Issohadores
Main events: The dressing and the procession of the Mamuthones. It seems that these rites date back to the age of the nuraghi and symbolize respect and veneration for animals, as well as serve to propitiate abundant harvests and drive away malevolent spirits.
Accommodation: Hotels and b&b from €29 per night

Probably the most beautiful carnival in Sicily, that of Acireale is characterized by an apotheosis of colors and music.

The carnival period there is full of gastronomic and musical events in the exclusive baroque setting of the town.

Mask: The Abbatazzu
Main events: Parades of allegorical floats and flowered floats; Shrove Tuesday with fireworks and the burning of the Carnival King
Accommodation: Hotels and b&b from €60 per night 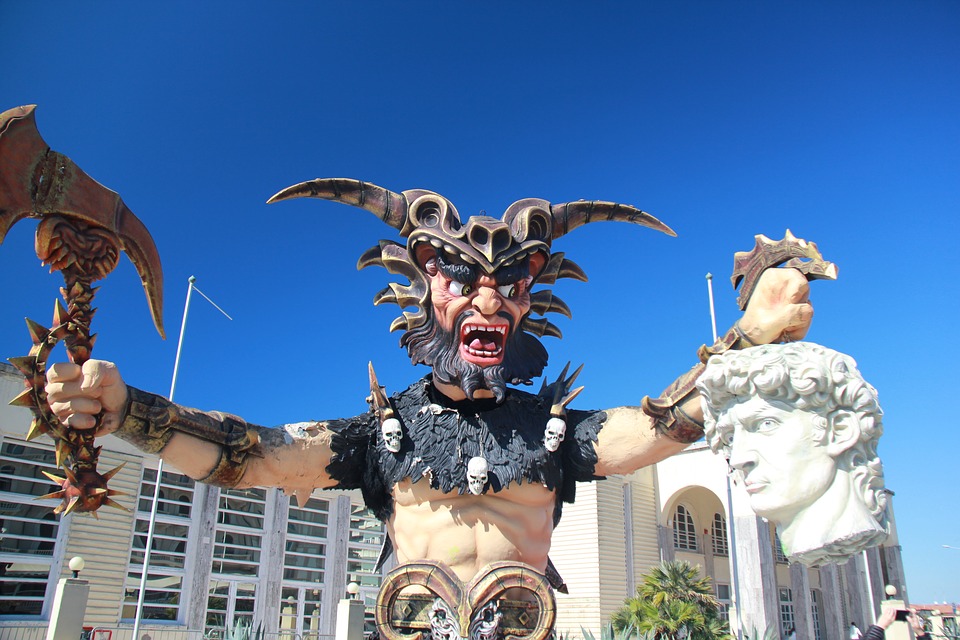 Among the oldest, most famous, and spectacular in Italy, the Viareggio Carnival is characterized by huge allegorical floats and a school of papier-mâché masters made up of over 25 companies and over 1,000 workers! More than floats, these are real theaters on the way.

Mask: Burlamacco
Main events: the Corso Mascherato parade, with a competition among the most spectacular allegorical floats at the end of which the winner is declared.
Accommodation: Hotels and b&b from €65 per night 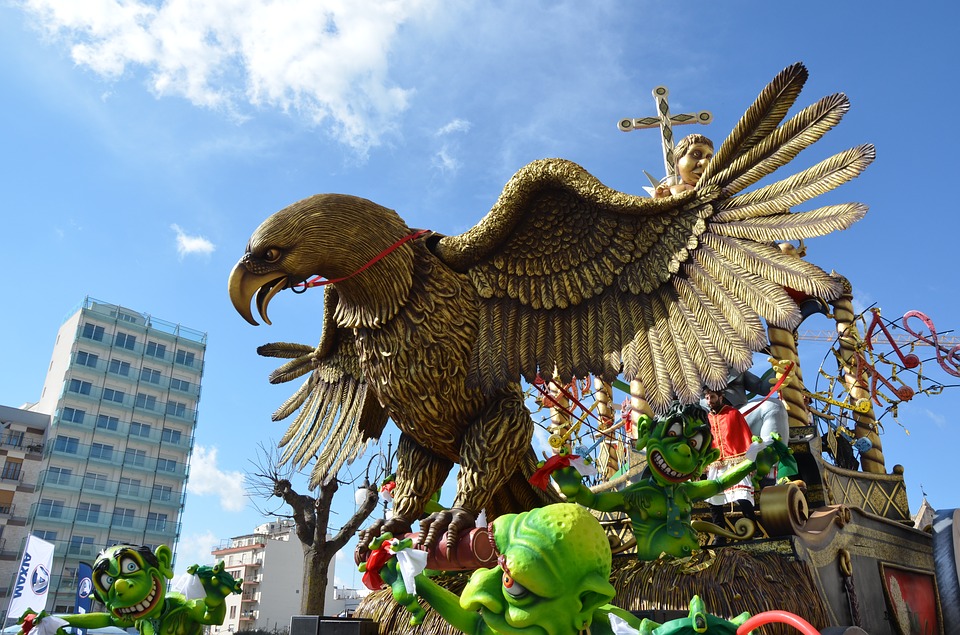 In Putignano, people work in the “Factory of Paper Giants”, with the papier-mâché masters who fight to establish the Putignano school, known all over the world. The Putignano Carnival is also considered one of the oldest in Europe.

Mask: Farinella
Main events: Carnival Thursdays; the Macaroni Bell: the rite provides that, in Piazza Plebiscito, a large papier-mâché bell will ring 365 strokes (through an amplification system), to symbolize the end of the celebrations and the beginning of penance. In the hour before midnight, the citizens eat macaroni with tomato and sausage and dance.
Accommodation: Hotels and b&b from €60 per night

We are in Piedmont, to celebrate an absolutely original carnival. In this event, the people recall their revolt against the tyrant, a revolt fought to the sound of oranges! The Battle of the Oranges, which takes place on Shrove Tuesday, sees the “orange-throwers on foot”, who represent the people, chase away the “wrestlers” on horse-drawn chariots, who represent the Tyrant who claimed the jus prime noctis on the miller’s daughter in the Middle Ages. The miller rebelled against the Tyrant by igniting the revolt.

Mask: the Tyrant and Violet the miller
Main events: the Battle of the Oranges; the Burning of Scarlo, a bonfire during which a large pole covered with dry heather is set on fire in the square: this symbolizes the expulsion of negativity and the regeneration of the earth considering good harvests
Accommodation: hotels and b & b from € 55.00 per night – see the offers

As most of you probably expected, the Carnival of Venice takes the first place in the ranking of the most beautiful carnivals in Italy in 2021. It’s the most famous in Italy and one of the most famous in the world with very ancient origins, which justifies its position and value. The most beautiful city in Italy gives rise to boat parades among the romantic canals, masks that animate Piazza San Marco (St. Mark’s Square), and music and concerts in every corner of the city, in every alley, in every heart that populates the city in those days.

Mask: the Baùta
Main events: the Festa delle Marie, a procession that recalls the tradition according to which the Doge of the Serenissima used to pay homage to 12 humble and beautiful girls of Venice; the Flight of the Angel from the Campanile of San Marco and the Flight of the Donkey from the Tower of Mestre; the Svolo del Leon, which concludes the festivities of Shrove Tuesday, with the tribute to the Winged Lion of San Marco, a symbol of Venice.
Accommodation: Hotels and b&b from €90 per night