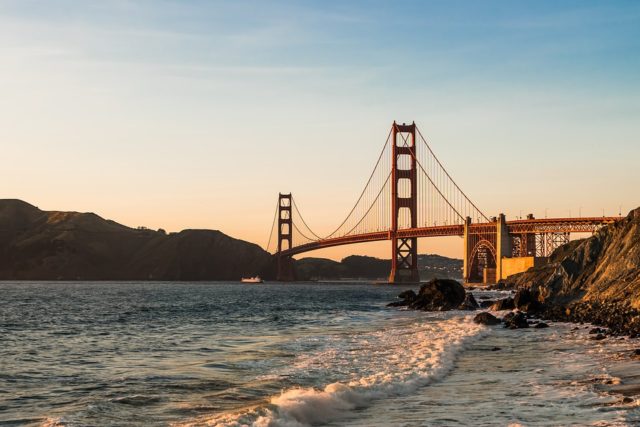 The 30 Largest Countries in the World

Over the centuries, monks, rulers, statesmen, and other luminaries have built wonderful libraries. These imposing structures are much more than simple libraries. They are true symbols of knowledge, power, and wealth. Today, we take you on a magnificent journey to discover arcane libraries and modern media libraries with majestic architecture, embellished with works of art and treasures of enormous value. Here are the 20 most beautiful libraries in the world. 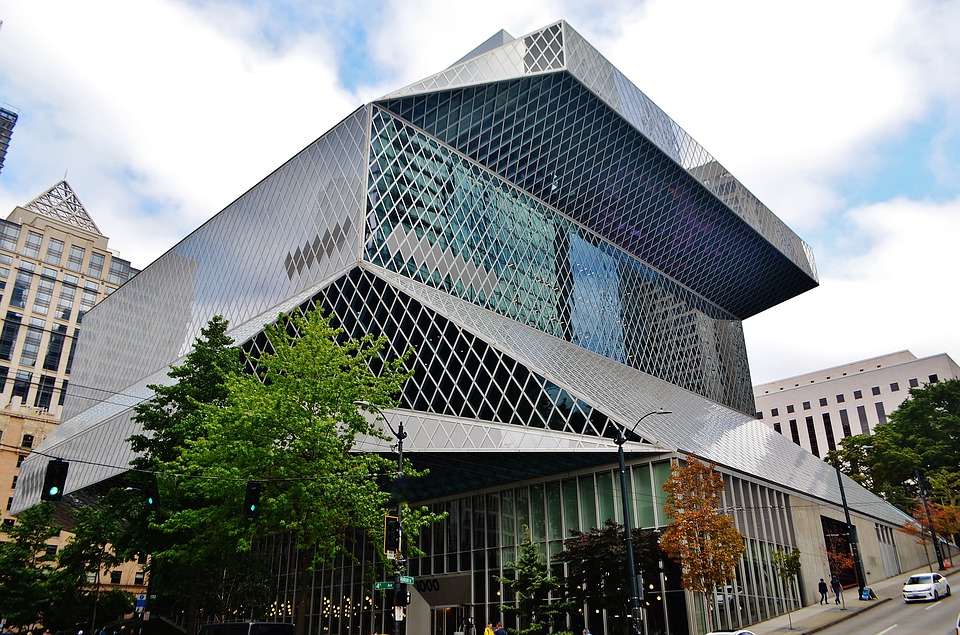 The plan by architects Rem Koolhaas and Joshua Principe Ramus was to create a building the external structure of which was completely captured by the internal design, specially designed to invite guests to read and work. The well-known entrepreneur Bill Gates financed part of the project by budgeting a good 20 million dollars.

With its hanging gardens and airy sunlit environments, Beitou Branch represents an oasis in the middle of Taipei metropolis. It is an eco-friendly library, which has won numerous awards since its opening in 2006. It has solar panels, a natural ventilation system, and a water recycling system.

18. Library of Parliament in Ottawa, Canada

Since 1876, the Parliament of Canada has benefited from a large Gothic/Victorian building where they store their cultural resources. This structure was designed by two Canadian architects: Chilion Jones and Thomas Fuller.

The interior of the Los Angeles Public Library is truly majestic. The hall is fabulous, with frescoes by Dean Cornwell divided into four sections, representing the history of California. The original building, inaugurated in 1926, was designed by the famous neo-Gothic architect Bertram Grosvenor Goodhue, who chose to embellish the work with some references to ancient Egypt.

The English city of Oxford has always been linked to culture and science. You can find many precious buildings there, including the Radcliffe Camera. This initially corresponded to the old Radcliffe Scientific Library, but later merged with the Bodleian, becoming its reading room. This library is an exceptional piece of 18th-century architecture and is named after the doctor John Radcliffe who decided to make his memorabilia available to the public over 250 years ago.

The Renaissance Marciana Library is one of the oldest Italian libraries. Its construction began in 1537 and continued for more than 50 years. Works by Venetian artists, such as Alessandro Vittoria, adorn walls and ceilings. The library has more than 750.000 books, 13.000 manuscripts, and 24.000 prints in its collection.

No gilded columns nor intricate frescoes, the Stuttgart Library is one of the greatest expressions of modern architecture. It has a cubic shape on the outside and sparkling surfaces and huge stairs and large and bright spaces inside. It seems that the architects were freely inspired by the Roman Pantheon for its realization.

13 . Library of the Strahov Monastery in Prague, Czech Republic

If, by any chance, you want to consult the bible or other religious manuscripts during your trip to Prague, you must go to the library of the Strahov Monastery. It was completed in 1679 and its stunning theological hall is the place where thousands of editions of the holy book were transcribed.

Luxurious and abundant gold finishes characterize the Baroque Joanina, which is part of the General Library of the University of Coimbra. It was completed in 1728 and houses over 70.000 volumes inside its three rooms.

The large collection of manuscripts, some of which date back to the 8th century, makes the Abbey Library of St. Gallen one of the most significant monastic libraries on the planet. Along with the rest of the abbey, it is listed as a UNESCO heritage site for being “a perfect example of a great Carolingian monastery”.

The State Capitol Law Library of Iowa in Des Moines is a beautiful building that any reading lover would want to get lost in. The interior space was adapted in the Renaissance style in 1880. The five floors are connected with spectacular cast-iron spiral staircases. 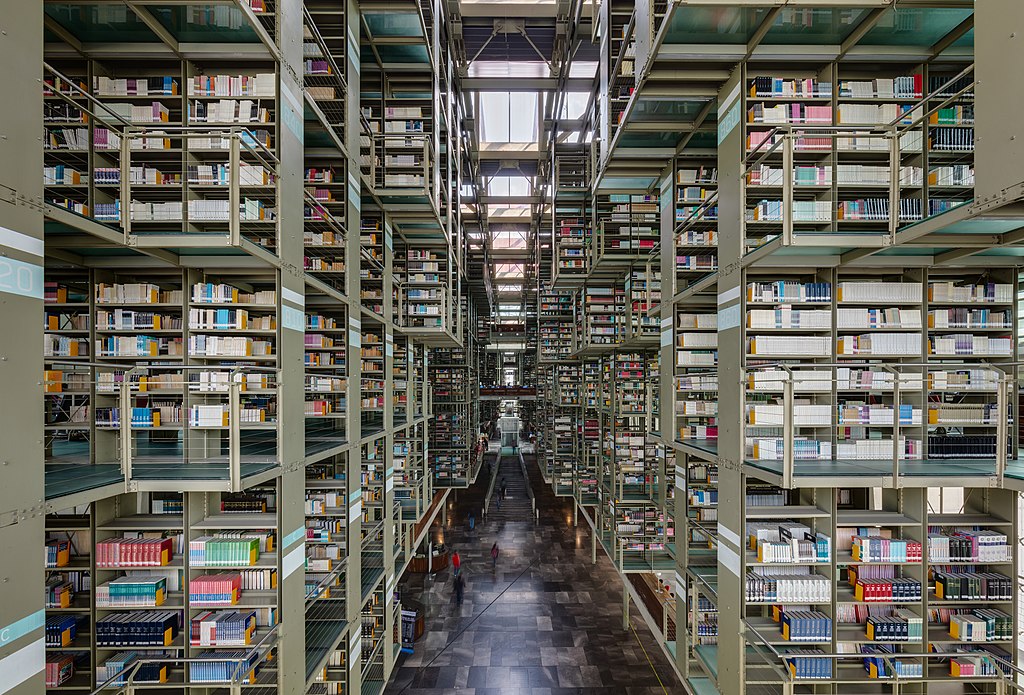 Opened in 2006, Vasconcelos was designed by the local architect Alberto Kalach. The building is integrated with a rich botanical garden and has hundreds of perfectly ordered shelves. Vasconcelos is a showcase for the best emerging artists of the state who exhibit sculptures, paintings, and other beautiful creations. 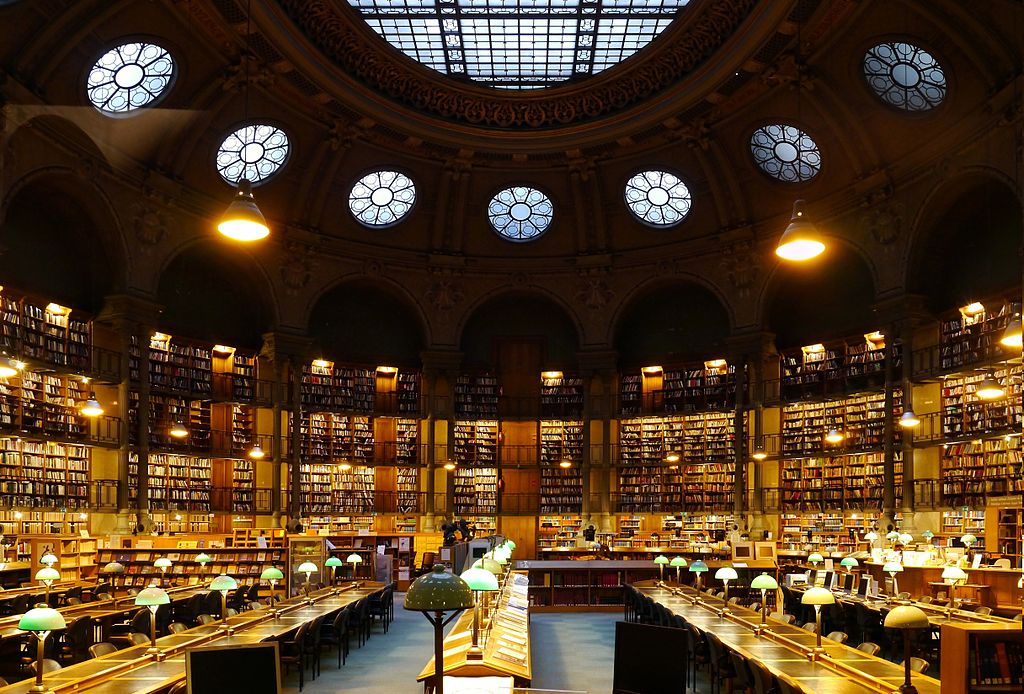 The National Library of France has literally multiplied its collection of artifacts reaching a staggering 30 million items, some of which date back to the 14th century. The circular reading rooms feature a fine and elegant design.

In this library is kept a priceless relic: the chess set, which dates back to the 9th century, that belonged to Emperor Charlemagne.

The splendid Central Library is undoubtedly the highlight of the university campus of the UNAM (National Autonomous University of Mexico). Completed in 1952, the building was designed by Gustavo Saavedra and Juan Martínez de Velasco. It contains around 400.000 books and is known for its striking exterior murals, made by painter Juan O’Gorman.

The London district of Peckham saw its value grow enormously in 2000 with the opening of the public library. The architects’ idea was to create “an avant-garde building” capable of providing a strong “psychological boost” to the area. The design looks like a colorful mix of glass, copper, and steel. 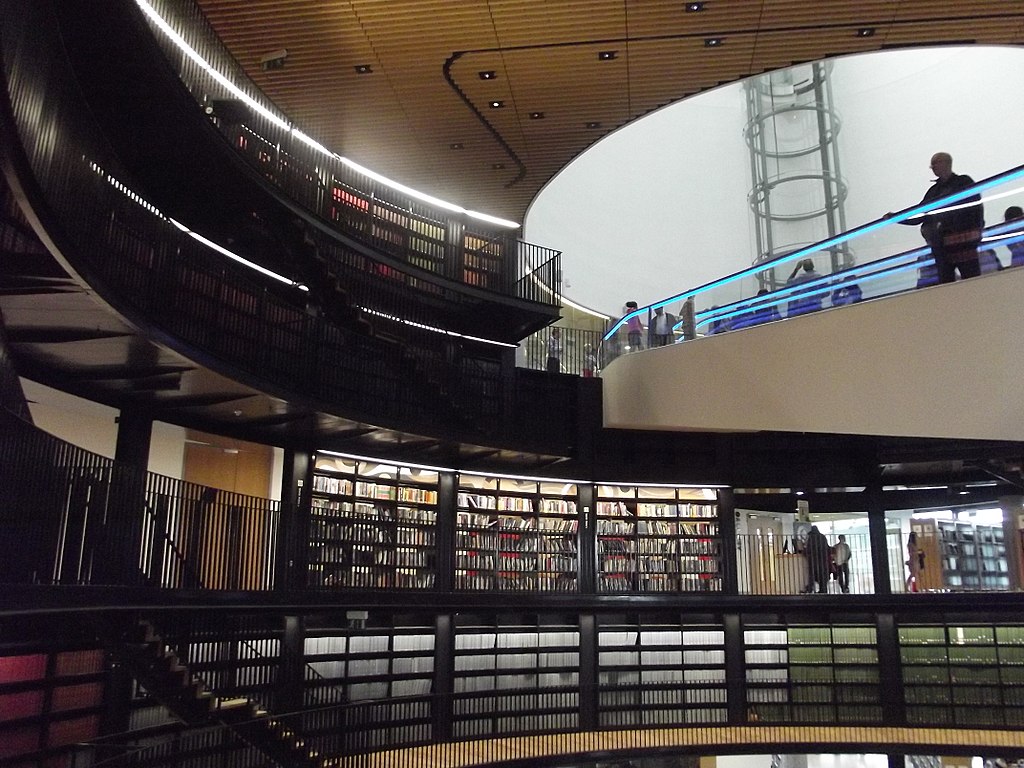 The Library of Birmingham is Britain’s largest public library. It has valuable resources within its walls, including texts for children and adults, important music collections, and a Shakespeare Memorial Room.

Originally founded by Queen Elizabeth I in 1592, the current structure started to be built in 1712. Inside, there are marble busts of famous writers such as Jonathan Swift, the writer of the novel “Gulliver’s Travels”. Many visitors come to this place to admire the “Book of Kells”, a richly decorated manuscript containing the four Gospels of the New Testament.

Another structure located in Italy is Sandro Penna’s Mediateca. Its external architecture is very specific; looking at it, you might think that an alien aircraft has landed in the pretty Perugia. The external windows light up at night and, at the entrance, the writings of the poet, whom this media library is dedicated to, flow on the transparent panels of the facade. The entire building is soundproofed, which helps create a perfect atmosphere for reading and studying. 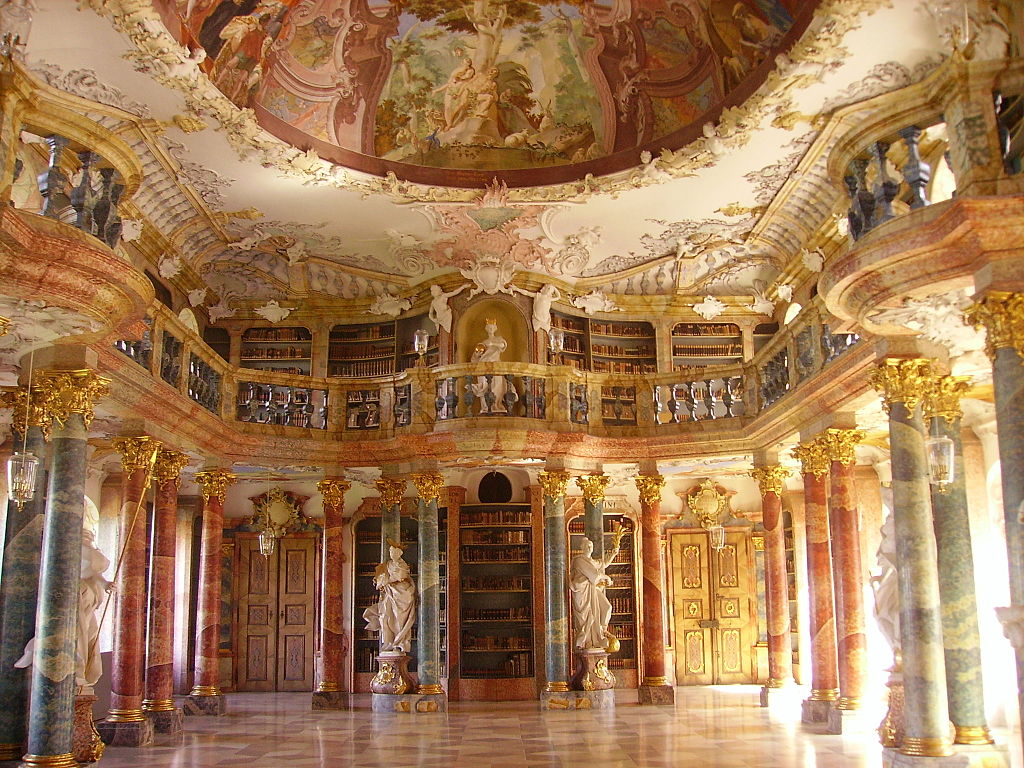 Taking the second position on our list, one thing is clear: if you are looking for a truly spectacular library, chances are you will find it near a monastery! Wiblingen Abbey is probably one of the most fascinating structures of its kind in the world. Beautiful paintings adorn the ceiling and sumptuous decorations make the interior space unique. The abbey library was designed by Christian Wiedemann, an architect rightfully renowned throughout Germany for his unmistakable Rococo style.

In the first place, we find the Admont Abbey Library, which was built in 1776. The baroque architect Joseph Hueber was commissioned to develop the design for the hall. Resplendent in hues of gold and white, the library is crowned by seven domes with frescoes representing different stages of human knowledge. In this library are kept the “Novissimi”, wonderful sculptures by Giuseppe Stammel.