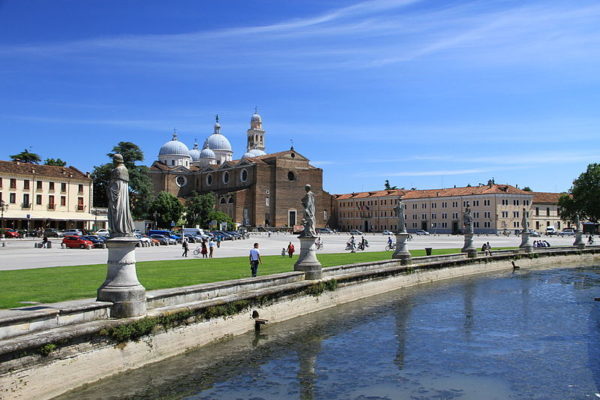 The Largest Squares in Italy

How many of you know the most beautiful fountains in the world? There are some really amusing monumental masterpieces in the world, spectacular places in Japan, Spain, Germany, the United States, almost all around the planet. Some fountains are really extravagant, some illusory, and others are made following the rules of more contemporary art. Some light up, some rotate, and others defy gravity. So, how can you not be impressed?

Now, let’s admire these impressive works along the list of the 20 most beautiful fountains in the world:

This is a wonderful fountain in the shape of a giant ring. An amazing work of contemporary art that is located on Highway 71 in Ohio, United States. It’s a true masterpiece worth admiring if you are nearby.

The fountain-sculpture God, Our Father on the Rainbow was designed in 1946 by the Swedish sculptor Carl Miles as a monument of peace to celebrate the founding of the United Nations. The American sculptor and longtime assistant of C. Miles, Marshall M. Fredericks, made the full-scale statue of the original in bronze. The fountain is located on the main street in central Stockholm, Sweden.

A beautiful cylindrical fountain from which water comes out and ends up in a swimming pool in the center of the room, coming from a skylight placed at the top. The water creates a sound similar to white noise, which creates an amazing feeling of relaxation and calm. Some tourists even start singing, as if it were accompanied by music, others sit in silence observing the water and its constantly changing descent. This fountain is indeed a place of deep meditation located at the Smithsonian National Museum of African American History and Culture in Washington DC, USA.

This fountain is a true riot of color and magnificence, incredibly decorated, with dragons on the side and a large Buddha in the center. It is located in Thailand, in the park Ancient Siam, also known as Ancient City or Mueang Boran. The park was built in 1963 and it’s considered the largest open-air museum in the world with its 320 hectares, 116 monuments, and typical Thai architectural attractions.

This is a beautiful fountain located inside the Keller Fountain Park, in the downtown area of ​​Portland. The fountain, which is the symbol of the park, was designed by Angela Danadjieva, inspired by the falls of the Columbia River Gorge, east of Portland. In 1999, the fountain received a medal from the American Society of Landscape Architects for its architectural and landscape beauty. 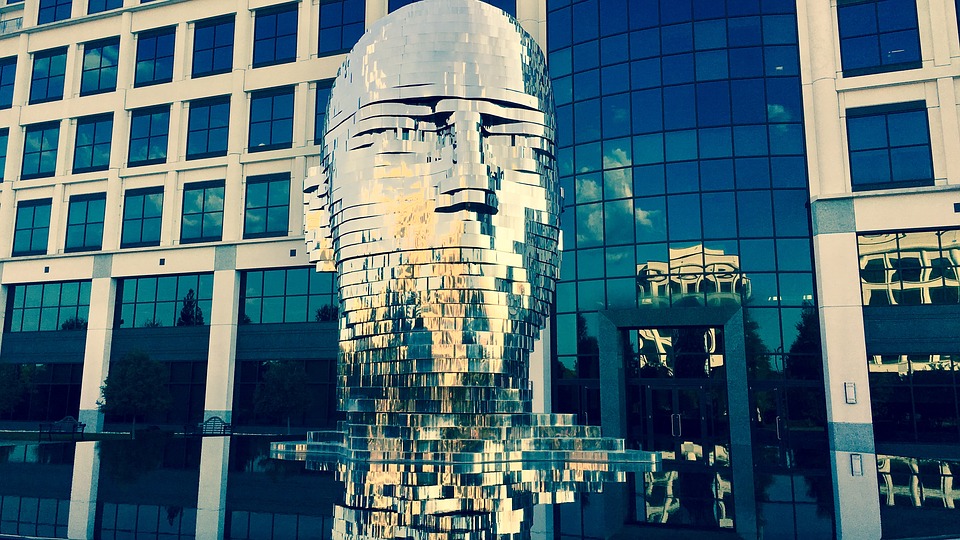 Partly an incredible sculpture and partly a fountain, Metalmorphosis is a work of the Czech sculptor David Černý. It’s nearly 8 meters high and 14 tons heavy and consists of two dozen stainless steel plates that rotate independently and periodically align to form a huge human head. A raised pool surrounds the sculpture and, as the plates line up, water flows out of the mouth of the head.

The “Tunnel of Surprises” is a fountain in the Circuito Màgico del Agua (Magic Water Circuit) in Lima. It was opened in 2007 and cost 13 million dollars. Built inside the Park of the Reserve, a historic 8-hectare park, this fountain consists of a series of 13 illuminated fountains. No wonder it entered the Guinness World Records as the largest complex of fountains in a public park. Some of these are interactive, such as the Laberinto del Ensueño (the Dream Maze). Getting to the center of this maze fountain is more a matter of timing than of path as one wrong step will make you land on top of a suddenly spitting jet of water!

This is an incredible fountain called “Mother Earth“, which appeared in the 2013 edition of the Mosaïcultures Internationales de Montréal exhibition. Founded in 1998 by Lise Cormier, Mosaïcultures Internationales de Montréal is a non-profit company that designs, sets up, and manages exhibitions, gardens, and mosaic works. The event is considered one of the most prestigious horticultural art “competitions” in the world and attracts some of the most impressive examples of mosaic culture from around the world.

On the occasion of the 2013 edition, the “Mother Earth” was presented, which enters our ranking by right.

The Rain Man is a contemporary art masterpiece designed, created, and given as a gift to the city of Florence by the artist Jean-Michel Folon, shortly before the Social Forum in Florence on November 6-9, 2002. The Bronze Man is 3 meters high and the water comes out from the top of the statue shaped like an umbrella. This fountain is located in the middle of a crossroad between Lungarno Aldo Moro and Viale Enrico de Nicola, not far from the Varlungo Bridge.

The monument of the Cascades of Hercules inside the Bergpark Wilhelmshöhe is undoubtedly an evocative Baroque and romantic landscape. The water flows from the giant statue of Hercules, passing by a water wheel unit, various fountains, waterfalls, basins, and caves. The water shows were set up by Landgrave Carl of Hesse-Kassel from 1689 onwards, to show his power, just like an absolute ruler. The idea came to him being inspired by various Italian, French, and English examples of garden art. The Italian architect Giovanni Francesco Guerniero was hired for the design. 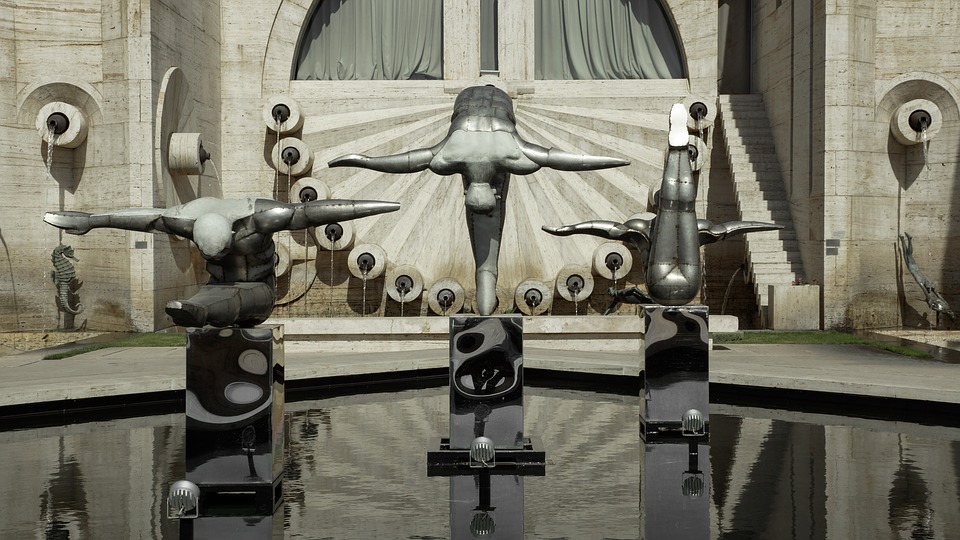 This is an extraordinary 24-meter high water fountain, located in the Dubai Mall in the United Arab Emirates. The artwork features fiberglass sculptures of divers traversing all four levels of the indoor shopping spaces. The fountain was designed by Singapore-based DPA Architects and opened in 2009. 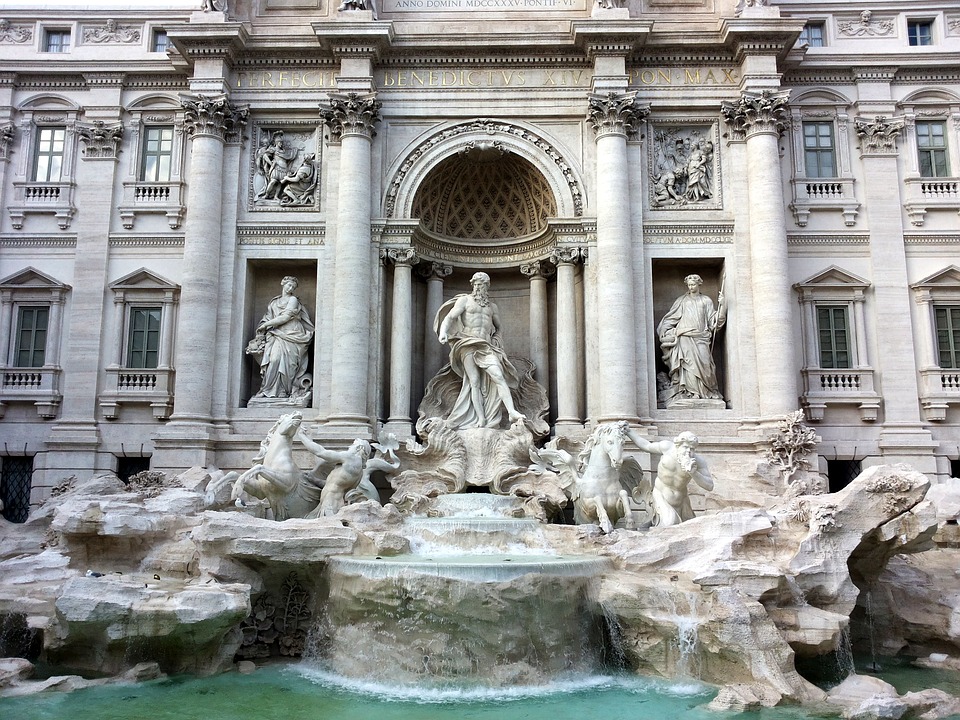 This is an all-Italian masterpiece located in the Eternal City, in the Trevi district. It was designed by the Italian architect Nicola Salvi and later completed by Pietro Bracci. It’s 26.3 meters high and 49.15 meters wide conquers the primacy of the Baroque fountain of the city and one of the most famous fountains in the world. The monument was also the protagonist of several very famous films such “La Dolce Vita” by Federico Fellini and “Three Coins in the Fountain“. The Trevi Fountain was finished in 1762 and was renovated in 1998. In 2015, it became even more beautiful thanks to a restoration carried out by the Roman fashion house Fendi.

The “Nine Floating Fountains” is a stunning creation by the Japanese landscape architect Isamu Noguchi. It was made for the World Expo held in Osaka, Japan in 1970. These amazing fountains seem to fly, and even though they have been built over 40 years ago, they still have the same charm today as they did then.

The Swarovski Crystal World is a museum located in Wattens, Austria. It was built in 1995 on the occasion of the centenary of the famous Austrian crystal company, Swarovski. The striking Crystal Worlds Center is fronted by a grass-covered head with a mouth being a fountain. This fantastic attraction was created by André Heller.

The fountain was created by the water sculptor William Pye in 2000 for the luxurious Seaham Hotel and Spa, near Sunderland, in the north of England. Charybdis is the name of a mermaid mentioned in Homer’s Odyssey, who was struck by a lightning bolt from Zeus, which turned her into a whirlpool as harsh punishment for stealing an ox from Hercules. Later, Pye built similar sculptures influenced by the history of Oman and Campinas, Brazil.

This bizarre fountain is located in Aqualand, Cadiz, Spain. At first glance, it looks like a faucet floating in the air, but if you look closer, you can see that there is a pipe hidden in the water flow holding the entire structure. In fact, it consists of a faucet mysteriously suspended over a swimming pool with an infinite supply of water flowing from it, apparently from nowhere. The faucet remains surprisingly stable despite having no visible support. This spectacular effect is achieved by a transparent tube in the center of the water column which keeps the tap in place and, at the same time, continues to feed it with water pumped from below. The water rises through the pipe and exits from the top.

The Moonlight Rainbow Fountain is the longest bridge fountain in the world, setting a Guinness World Record with nearly 10.000 1.140m long LED nozzles running along the sides, firing 190 tons of water per minute. Installed in September 2009 on the Banpo Bridge, the former Seoul Mayor Oh Se-hoon said the bridge will make the city even more beautiful and show Seoul‘s eco-friendliness, as the water is pumped directly from the river itself and continuously recycled. The bridge has 38 water pumps and 380 nozzles on both sides, which draw 190 tons of water per minute from the river, 20 meters below the bridge, and shoot up to 43 meters horizontally. 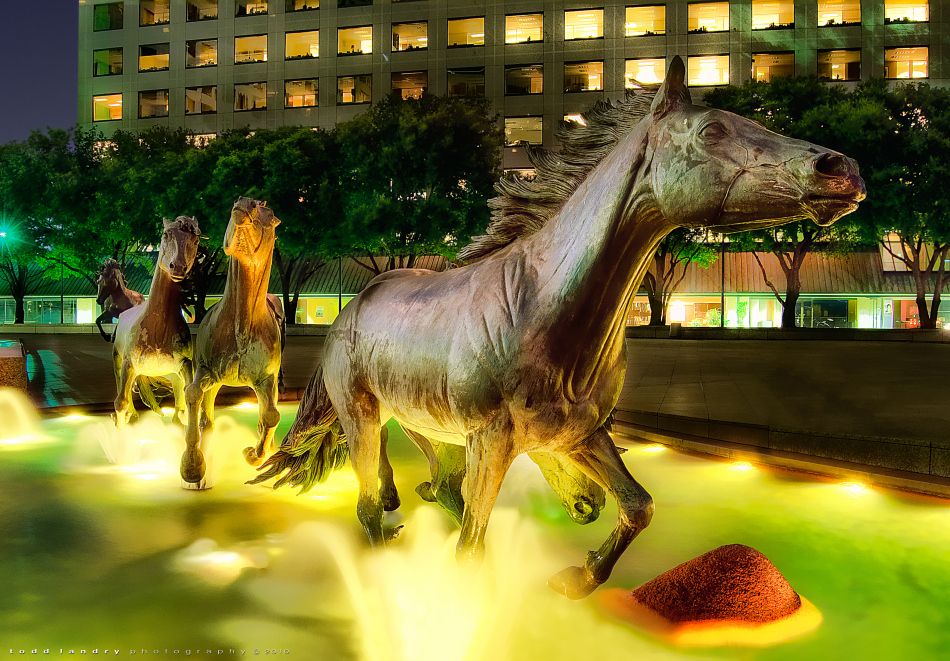 The “Mustangs of Las Colinas” is a bronze sculpture made by Robert Glen which decorates Williams Square in Las Colinas in Irving, Texas. It is said to be the largest equestrian sculpture in the world.

The sculpture commemorates the wild horses that were historically important inhabitants of the biggest part of Texas. It depicts a group of horses running through a stream, with fountains giving the effect of water splashed by the animals’ hooves. Horses are meant to represent the drive, initiative, and limitless lifestyle, representative of the state in its pioneer days. The work was commissioned in 1976 and installed in 1984.

It’s a spectacular fountain located in Osaka Station, Japan, more specifically in the South Gate Building of the new Osaka Station City complex. It consists of a large rectangular fountain that displays a digital reading of the time with shifting floral motifs and falling shapes along the water wall. Designed by a local company, Koei Industry, the fountain works using a digitally controlled printer that ejects water droplets with carefully controlled patterns to reproduce images stored on a PC. The water droplets are illuminated by ambient lights.

The Water Boat Fountain is a spectacular fountain in the shape of a boat, located at the Malvarrosa beach in Valencia, Spain, where America’s Cup was held. This beautiful sculptural fountain gives the illusion of a sailboat with water jets. It’s really impressive.