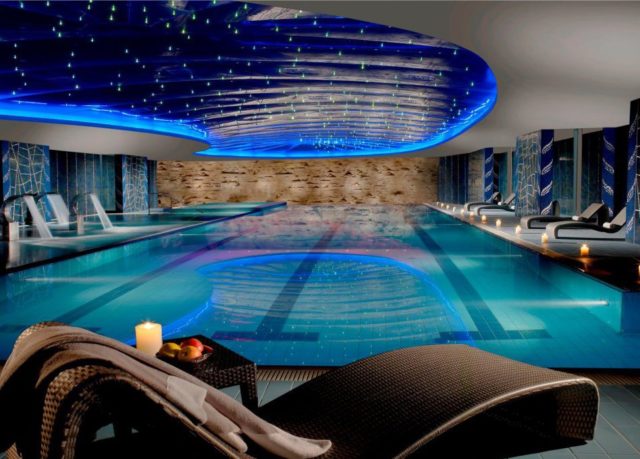 The 15 Most Beautiful Spas in the World

Italy has always played an important role in culture and history: art, music, and theater are the three disciplines in which well-known faces from Italy have distinguished themselves for their ingenuity and creativity, remaining etched in the memory and considered points of reference even after centuries. In terms of the theater, some of the best-known Italian architects are Antonio Bibiena, Andrea Palladio, and Giuseppe Piermarini; among the opera composers, the list is very long with Giuseppe Verdi, Giacomo Puccini, Gioacchino Rossini, and the great librettist Francesco Maria Piave standing out.

The theater, born as a meeting place for the rich society, today it’s a place where all kinds of performances and important conferences and meetings are held. Now, let’s see the official ranking of the 15 most beautiful and important Italian theaters in Italy.

NOTE: The following ranking is a result of a survey that involved over 10,000 travelers who were asked to choose 5 preferences from over 100 Italian theaters.

Built as a court theater of the Dukes of Parma and Piacenza, this theater is housed in a large hall. It suffered a sad fate during the Second World War, when it was almost completely destroyed. Rebuilt in the 1950s, it has resumed hosting important theatrical works since 2001  the very famous version of Rigoletto with Pavarotti was recorded at the Farnese Theater.

A great Renaissance project by the architect Andrea Palladio, the Olympic Theater in Vicenza was inaugurated in 1585 with Sophocles’ Oedipus Re. It has been a Unesco World Heritage Site since 1994 and is still used for festivals, concerts, and ceremonies. The inside of the theater houses 95 statues and it’s the oldest of the theaters on this list.

The Bibiena Theater of Mantua, also known as the “Scientific Theater”, is a small pearl set in the wonderful city of the Gonzaga family. Designed by the architect Antonio Bibiena with the facade by Piermarini, the theater was built on the remains of the ancient Gonzaga palace: the reason why its dimensions are small. Today, it’s only open on special occasions, such as the Festivaletteratura; however, it’s possible to book a visit.

Built after the fire that destroyed the Malvezzi Theater, the Municipal Theater of Bologna was designed by the famous architect Antonio Bibiena. Fun fact: it was the first theater in Italy that hosted an opera by Wagner, the “Lohengrin”, which was followed by three other works by the same composer. Today it’s one of the most active theaters in Bologna and the entire Emilia-Romagna.

Inaugurated in 1801, this theater enjoyed considerable success with Giuseppe Verdi’s Nabucco (1843 – 1844). Undergoing several renovations, the theater’s capacity was increased in 1881. The Guiseppe Verdi Opera House is known throughout Europe for the National Operetta Festival, which is held from 1950 to 2011.

Also known as Costanzi Theater after its creator, Domenico Costanzi, this theater was purchased by the Municipality of Rome. In 1926, it started an expansion and arrangement project to increase the boxes’ tiers from 3 to 4. This theater is very important not only for opera but also for ballet. As a matter of fact, the Italian premiere of “The Firebird” by Igor Stravinskij was right here.

Fulcrum of the opera of Catania, the hall is of immense decorative richness to the point of being considered one of the most beautiful theaters built during the 19th century. Numerous important works have been staged here, including some of the best-known performers like Maria Callas who performed in Bellini’s Norma in 1950.

The Royal Theater of Turin is another of the most important theaters in Italy and Europe. Commissioned by Duke Vittorio Amedeo II, it changed several ownerships and names. Damaged by a fire in 1936, it was rebuilt in 1973, reopening on 10 April with the opera “I Vespri Siciliani” by Giuseppe Verdi. One of the artists who performed here was the extraordinary Maria Callas.

Considered the “first great example of Italian theater”, La Pergola in Florence was built with a wooden structure in the 17th century with the novelty of the boxes. Over the centuries, it has undergone numerous transformations. For example, the 4th and 5th tier of boxes were demolished in 1912 to make room for the Gallery. It’s believed that the genre of melodrama was born in this theater.

Main theater in Genoa, the Carlo Felice is also one of the best-known in Italy. It’s located in the city center and was also damaged during World War II. The process of procurement of works and reconstruction was long and tiring, and the theater was returned to the city in 1991.

The San Carlo Theater in Naples is one of the most prestigious in Italy and the world. In the beginning, only the serious opera was performed there. Over the centuries, some of the most important personas in the opera/musical field, such as Händel, Hyden, Mozart, Rossini, Donizetti, and Verdi, were guests in this theater. The two world wars caused considerable damage to the structure, which was last restored in 2008.

The fourth-largest theater in Italy in terms of size, Petruzzelli Theater’s original capacity was 3,500 people but was reduced to 1,250 for safety reasons and some renovation works. It stopped working from 1991 to 2009 due to a serious arson and was inaugurated again with Puccini’s Turandot.

It is a theater with a long and complex history: victim of two fires, it has undergone a double reconstruction. However, the essence doesn’t change: La Fenice is one of the most important theaters in Italy and the world, home to numerous premieres of operas by Verdi, Rossini, Bellini, and Donizetti and important opera and symphonic seasons. La Fenice was also home to the International Festival of Contemporary Music.

The Massimo Vittorio Emanuele Theater in Palermo is the largest opera house in Italy and one of the most important in Europe. The original capacity was 3,200 seats and it was the site of some important world premieres, such as “Barbarina” by Gino Marinuzzi and “Mimì Pinson” by Ruggero Leoncavallo.

At the first position of our ranking of the most beautiful and important theaters in Italy, we find the La Scala Theater. This opera house is home to the most prestigious national and international operas and at the center of the spotlight. Built on Piermarini’s project, the rooms such as the foyer are extremely elegant, while the hall represented the turning point from the baroque to the neoclassical theater. There are 6 levels of stages and galleries.