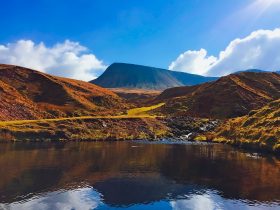 15 of the most beautiful places to visit in Wales

Germany is not just Berlin. When crossing this beautiful country it is possible to come across different historical centers, small medieval villages, and several other metropolises, pervaded by history and culture. Here is the list of the ten most beautiful cities in Germany. 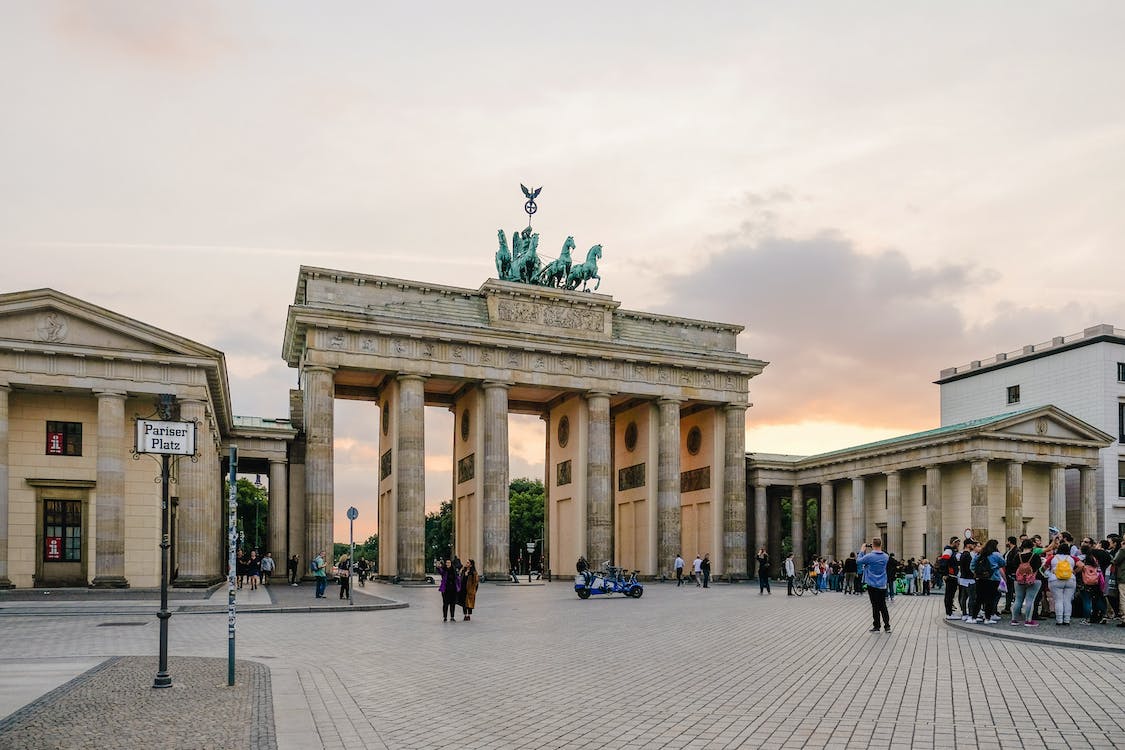 Berlin, the capital of Germany, is one of the cultural, political, scientific, and exhibition centers in all of Europe, but one of the most populous cities, with its 3,531,201 inhabitants. A city full of life and energy, Berlin is a young city, home to numerous festivals, fairs, and events, which together with the numerous cultural destinations and make it suitable for any type of holiday.

From mid-May to the end of September is the best time that you can visit Berlin. Always have an umbrella with you and some warmer clothes even in summer. 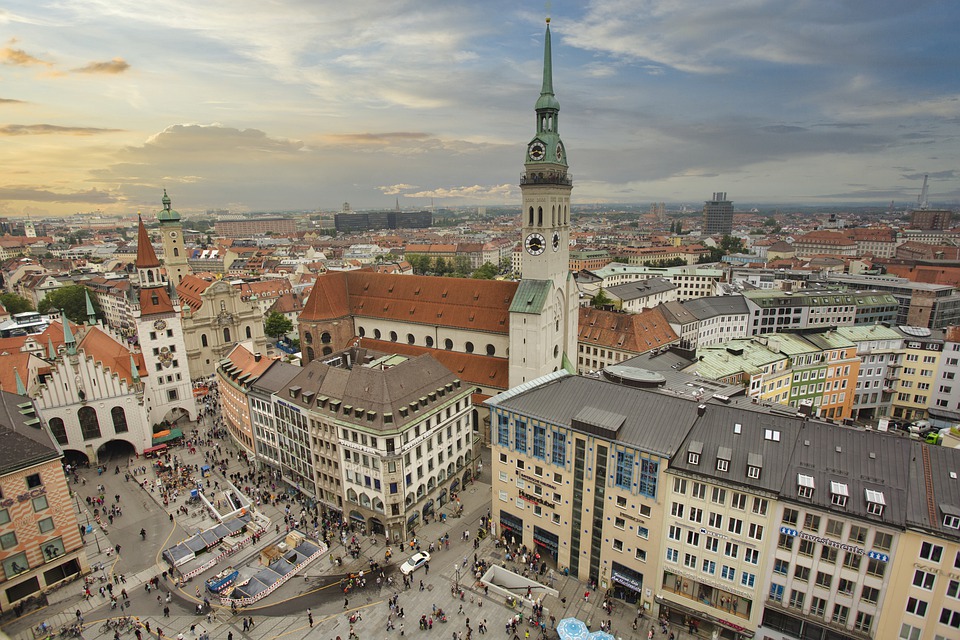 Munich with its nearly 2 million inhabitants is the third-largest city in Germany. Famous for being the home of royal residences (some of which are used by Disney as a model) and home to numerous churches and museums,

Munich is a city where trends and folklore go hand in hand. Just take a trip to Oktoberfest and the Allianz Arena to realize it.

It is advisable to visit this place from mid-May to mid-September when the temperature is mild. July and August are the hottest months, but it is still advisable to bring with you what you need for the “cool” and the rain. 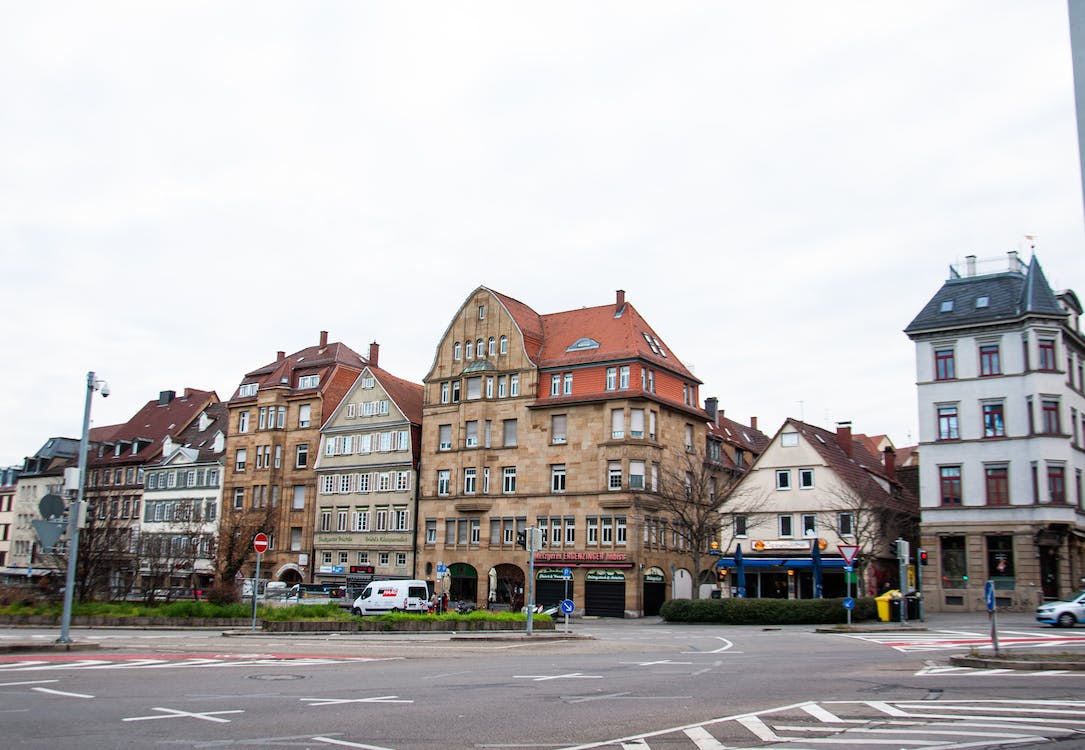 Stuttgart has about 600,000 inhabitants, and is among the most famous cities in all of Germany, due to its administrative, economic, and above all cultural importance. Typical tourist city, known both for its countless historical and cultural sites and for the large automotive industries (Porsche and BMW), Stuttgart is located near the Neckar River and the Black Forest, famous for being the setting for many of the Grimm’s fables.

You can visit comfortably from mid-May to mid-September when the temperature is mild. July and August are the hottest months, but it is still advisable to bring with you what you need for the “cool” and the rain. 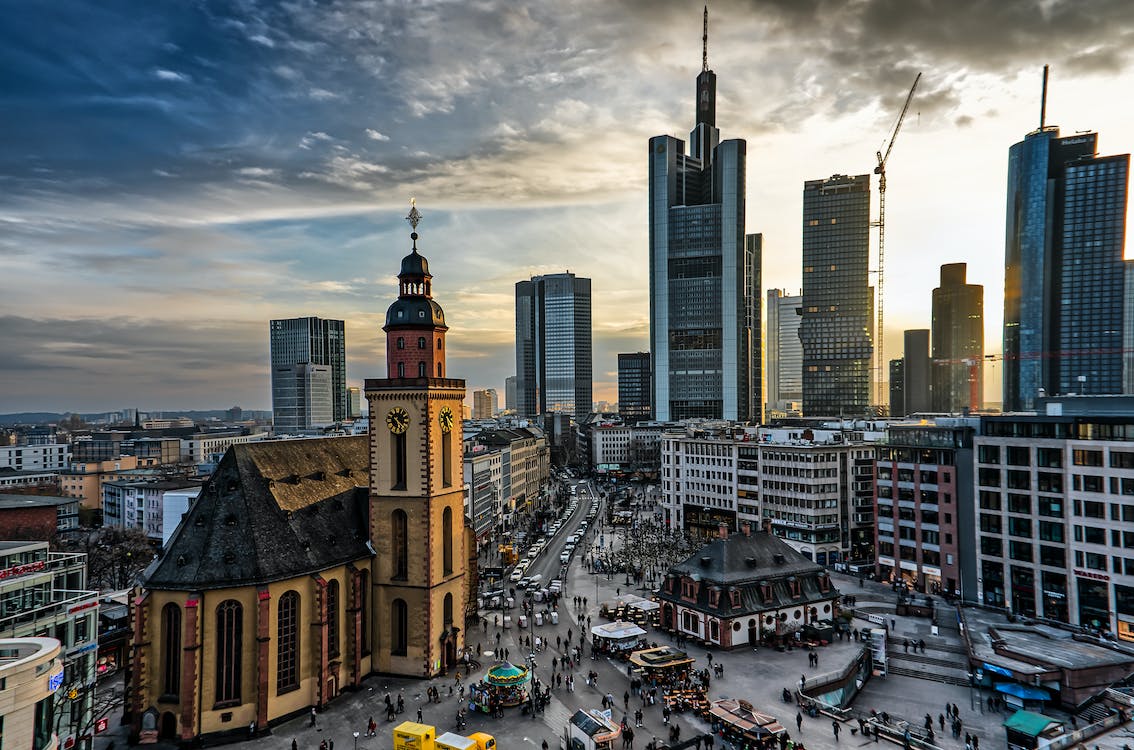 Frankfurt, with its 701,350 inhabitants, is one of the largest cities in Germany and is located on the river Main. Given its almost total reconstruction, due to the bombings suffered during the war, Frankfurt has lost almost all of its historical heritage but still has some interesting tourist attractions, such as numerous shops, skyscrapers, and art galleries.

The financial center of Germany and one of the most important in Europe, Frankfurt is the seat of the European Central Bank, the German Federal Bank, and the Bank of Frankfurt.

From mid-May to the end of September. Just always have an umbrella with you, and some warmer clothes even in summer. 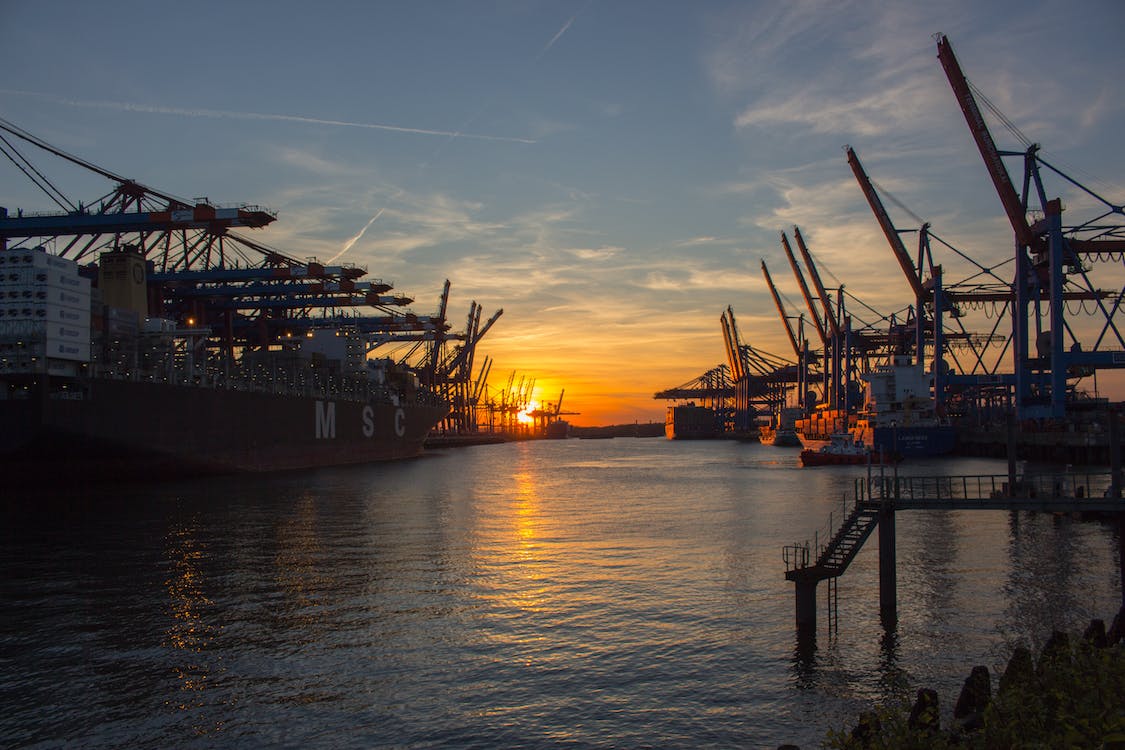 Hamburg, with its 1.763 million inhabitants, is the second-most populous city in Germany. Located on the estuary of the Elbe River, Hamburg is a city-state, and still, today boasts the title of Freie-und Hansestadt Hamburg (Free and Hanseatic City of Hamburg).

It is a city with a magical atmosphere, given by the contrast between the ancient structures of the center, dating back to the 18th and 19th centuries, and the port, with its futuristic buildings, Hamburg provides everyone with the right opportunity to have fun.

Famous for its Spiecherstadt, the largest warehouse complex in the world that rests on thousands of oak poles, the city also has no shortage of “nightlife” as well as cultural and/or family-friendly entertainment.

Spring and summer, when the climate is milder and less rainy. In Hamburg, it rains all year round but from April it is possible to encounter less rain and thunderstorms. In summer the climate is around 13 ° up to a maximum of 22 °, all thanks to the mitigating action of the storm surges. 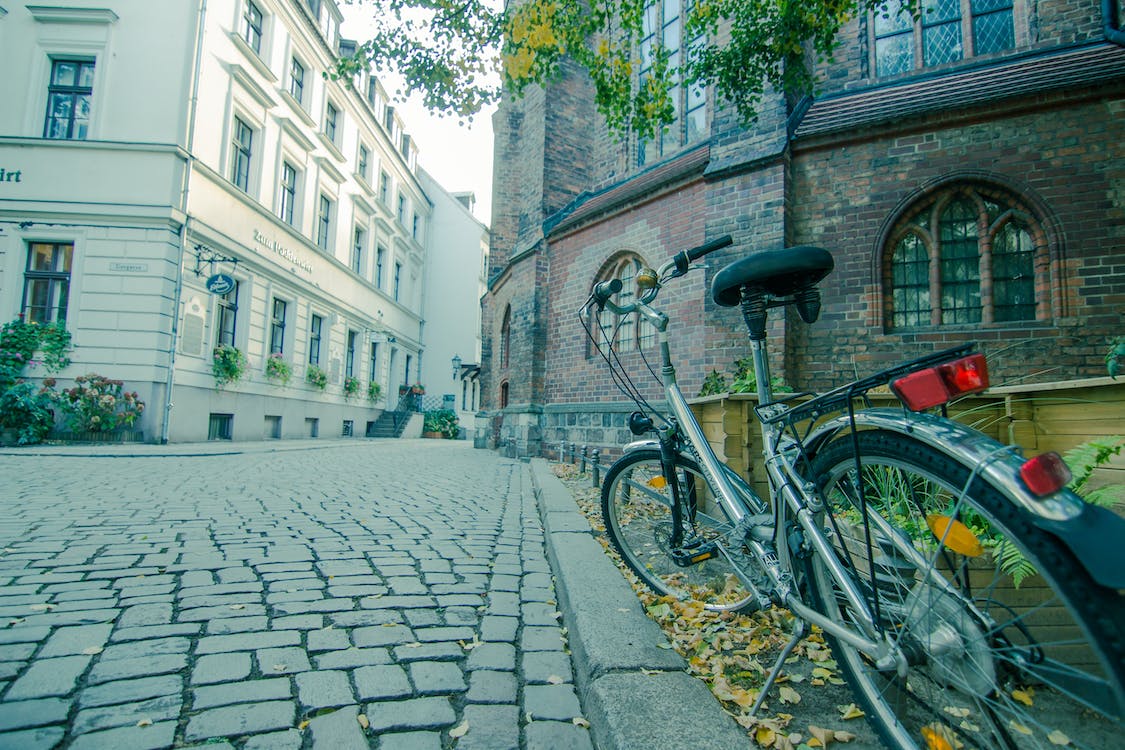 Weimar is a city of 65,479 inhabitants in Thuringia and is one of the largest cultural centers in all of Germany. With a rather small extension, the city has no representative monuments, but it can be considered a monument itself, so much so that it has been declared a UNESCO World Heritage Site.

It was the birthplace of illustrious personalities such as Schiller, Goethe, Bach, and Nietzsche, and is home to the Buchenwald concentration camp, now active as a memory and documentation center.

As in other German cities, also in Weimar, it is possible to find a variant of bratwurst, the roasted sausage, accompanied by Thüringer Klöße, pasta balls, and potatoes typical of Thuringia.

In summer, when thunderstorms are short and not very intense, even if experienced daily. 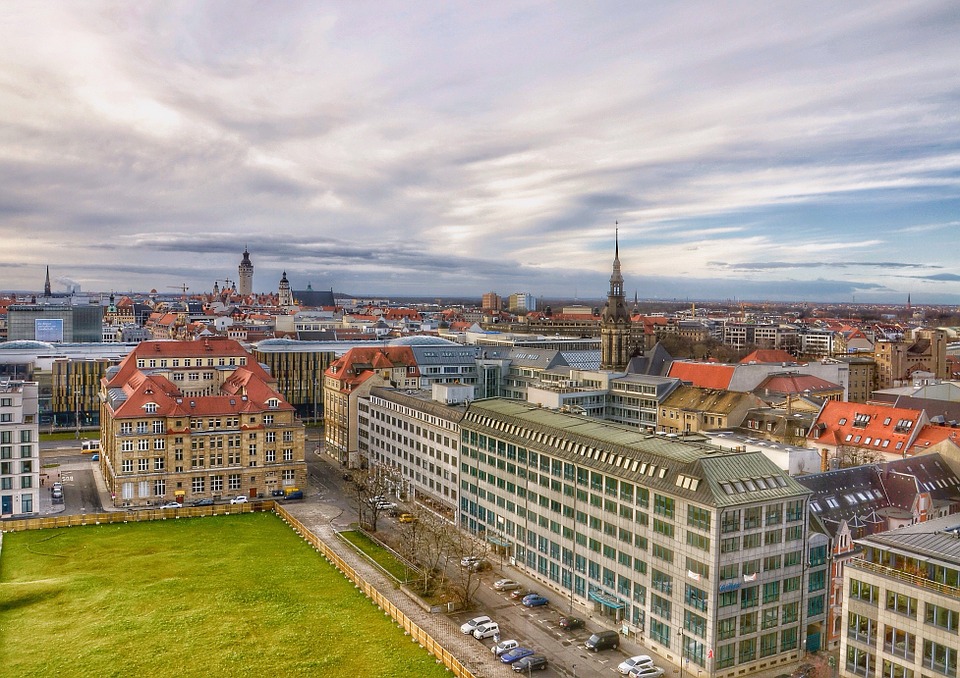 Leipzig is a city of 531,562 inhabitants located in Saxony, historically significant as it was the site, in 1813, of the Battle of the Nations, and in 1989 of some peaceful pro-fall demonstrations of the Berlin Wall. Today Leipzig is defined as the “new Berlin” as it is modeled on the example of the capital, of which it is cheaper and with a nightlife of equal “fame”.

From mid-May to the end of September, when the weather is still pleasant, with temperatures around 24/25 degrees. However, it is always better to have an umbrella in your suitcase and be prepared for the cold, as temperatures are characterized by strong instability. 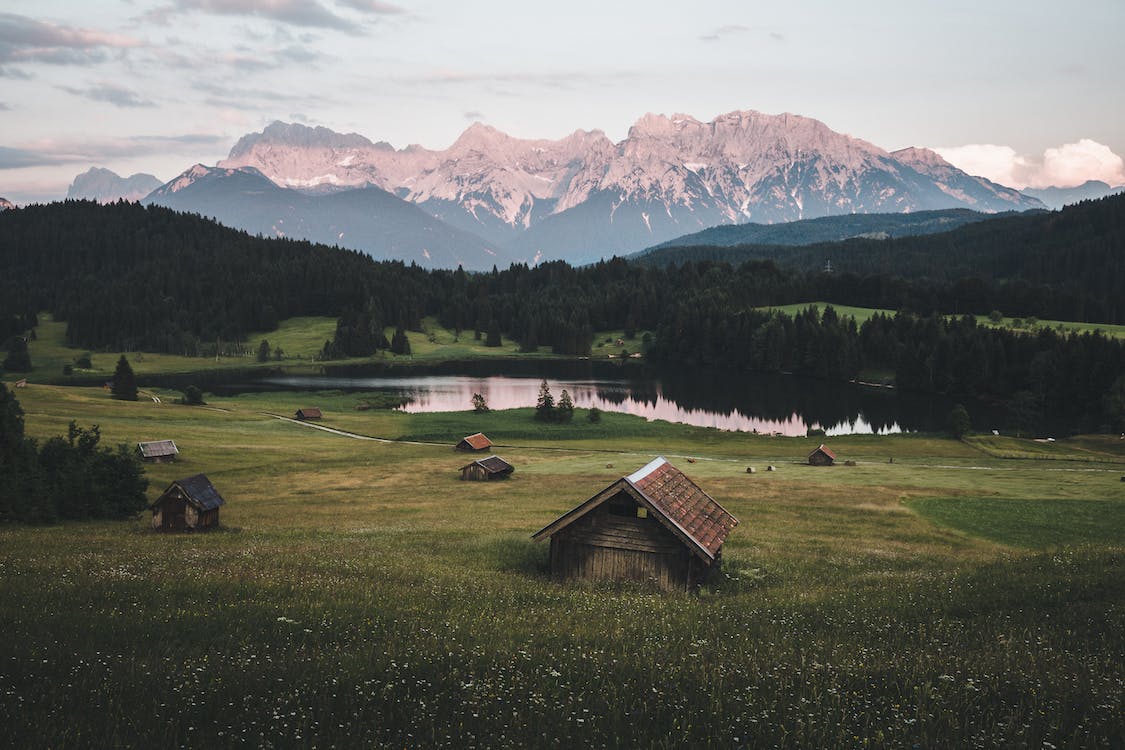 It is located on the banks of the Rhine, Cologne has 1,800,000 inhabitants, making it the fourth largest city in Germany. Completely rebuilt after the Second World War, it is considered as the cultural, political, and above all economic center of the Rhineland, given the large presence of metallurgical, automotive, and chemical industries.

Famous for its carnival, legend has it that the remains of the Magi are preserved in the Cathedral (a UNESCO heritage site since 1996).

Mid-May to mid-September, a period characterized by a mild climate that is perfect for traveling. 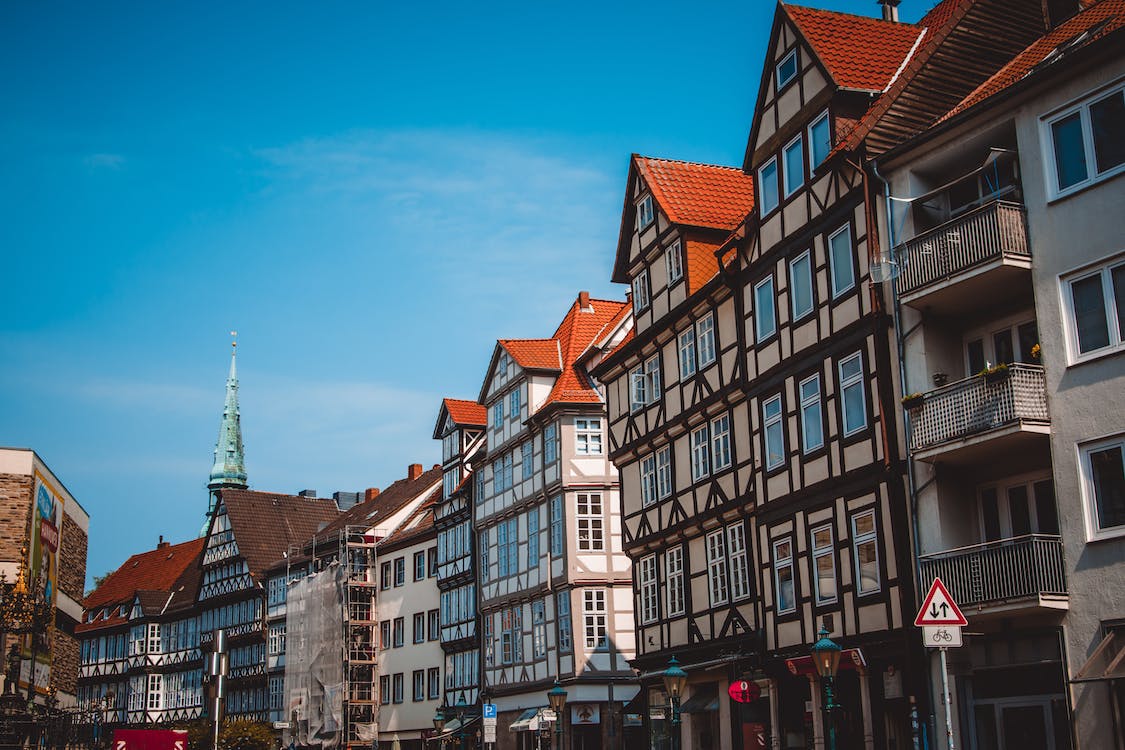 Located in the Land of Bavaria, on the banks of the river Pegnitz, Nuremberg has over half a million inhabitants. Although it was rebuilt after the Second World War, the city center still has interesting buildings from an artistic and historical point of view.

Famous is the Christkindlesmarkt, in Italian the Market of the Child Jesus: a Christmas market, which is said to have even been established by Martin Luther.

From mid-May to mid-September, when the weather is still pleasant and mild is considerably the best months to choose if you want to go here. 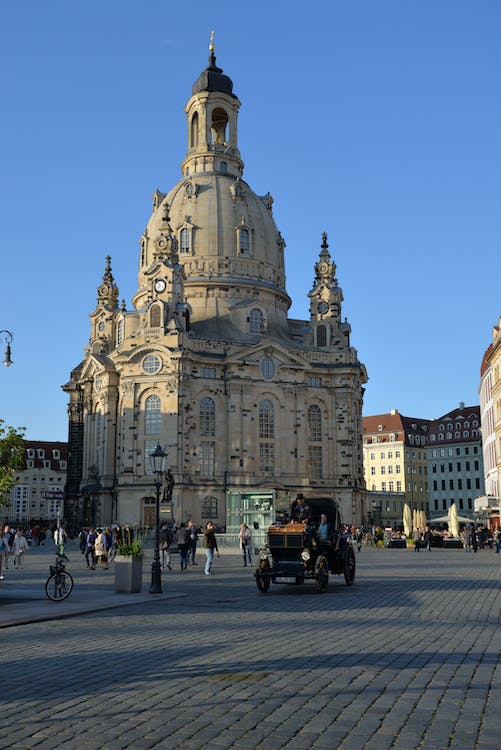 Dresda is a city of 531,806 inhabitants, which rises on the Elbe river. The valley of the city had been included by UNESCO on the World Heritage List only to be removed in 2009 following the construction of the Waldschlösschen bridge, guilty of usurping the landscape portrayed by Canaletto in his paintings.

Famous for its Christmas markets, Dresden makes architectural experimentation its strong point: on the one hand, we have the faithfully Baroque part, on the other the modern part, with the famous house that rings when it rains.

A typical dessert of Dresden is the Dresden Stollen, the German equivalent of panettone.

From mid-May to the end of September, although the days are shorter in the last month. Although in this period the climate is pleasant, it is good to be equipped for sudden temperature changes, and above all for rain. 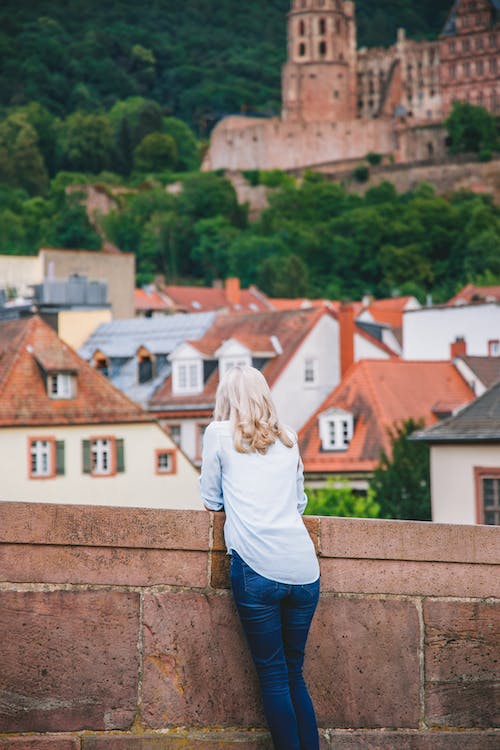 Heidelberg is located on the banks of the Neckar River and has 156,267 inhabitants, of which about 30,000 are students. This is because, after the founding in 1386 of what is today the oldest university in Germany, Heidelberg has become the seat of the world’s major cultural and scientific centers.

Although it is also the seat of numerous industries, the views of the city have retained their romanticism, inspiration for some of Turner’s paintings.

Temperatures in Heidelberg can reach peaks of 30 ° in summer, which is still the best time to visit, given the shorter thunderstorms. 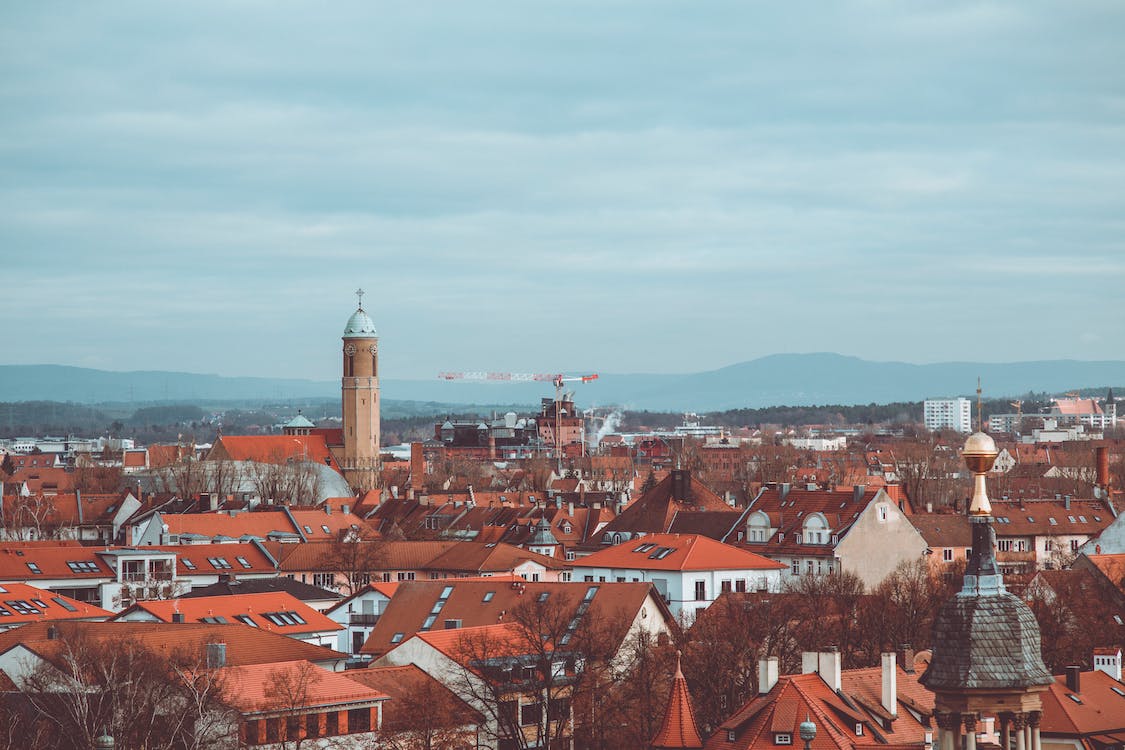 Bamberg has 70,000 inhabitants and is located on the River Regnitz, in Upper Franconia. Tiny town, suitable for family holidays or day trips, Bamberg is famous for being the seat of the Schlenkerla brewery (born in the Middle Ages) and for the production of Rauchbier beer: although of all, the most famous is the Schinkenbier with Speck. Very characteristic is the Klein-Veneding stretch, little Venice, where it is possible to admire the floating Town Hall.

Spring and autumn are the less rainy periods of the year which you can consider if you want to go to this place. 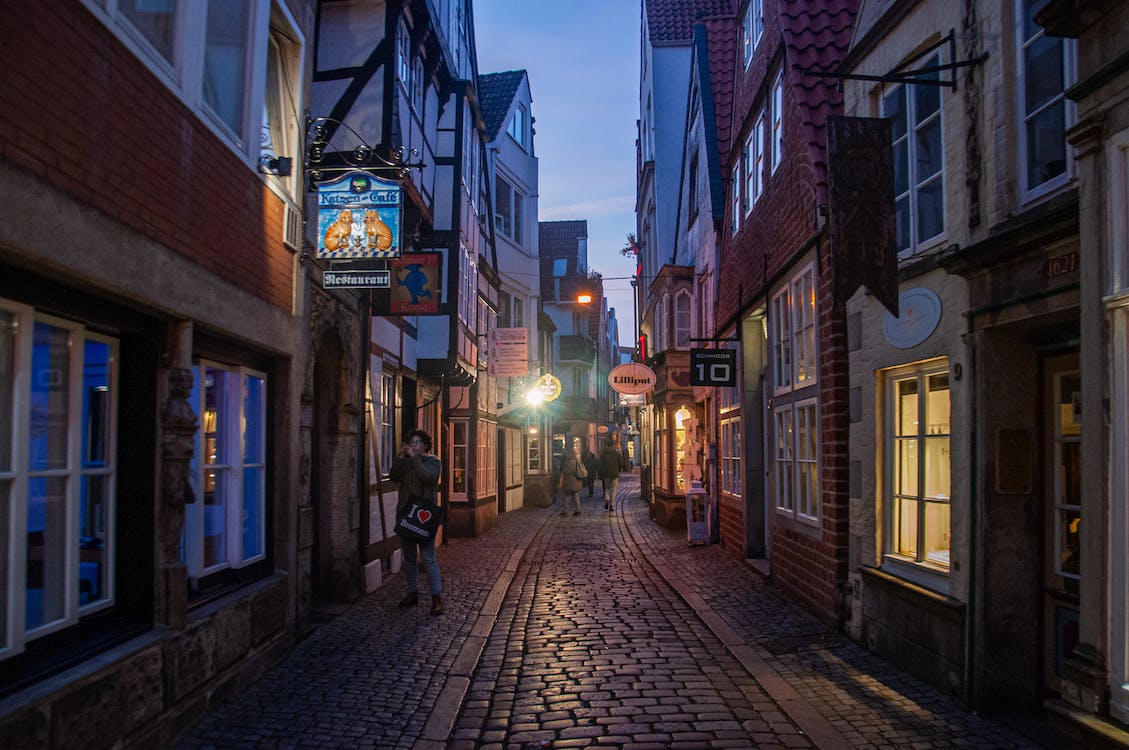 Brema is a city of 550,000 inhabitants, located in Northern Germany. Developed on the River Weser, the city is the oldest in the nation, has an economy based on maritime trade, shipbuilding, and the automobile industry: it is the headquarters of Daimler and Chrysler.

Rich in monuments, museums, art, history, and culture, it is famous all over the world for being the seat of the fairytale “the Bremen Town Musicians”, of which there is a famous statue in the city.

A characteristic event is a six-day race: a cycling event that gathers more than 100,000 people every year.

From May to September, when temperatures rise officially, starting the summer, and the rains are no longer frequent. 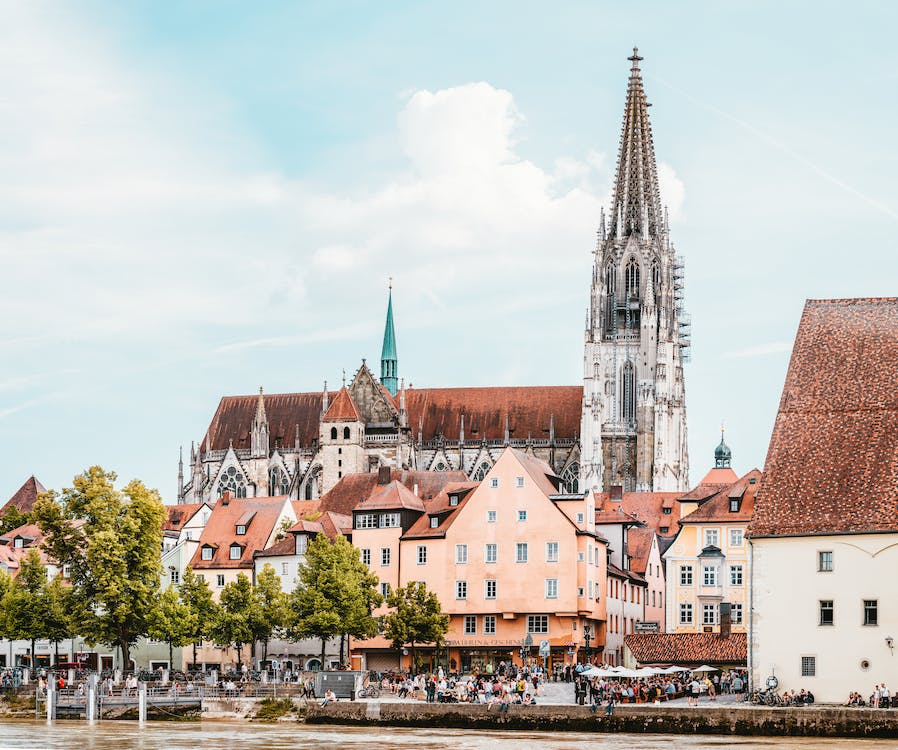 Regensburg is a city in Bavaria with 145,465 inhabitants, a rare case in all of Germany as it did not suffer damage during the Second World War: this is why UNESCO declared it a World Heritage Site in 2006. So, to date, a stroll for Regensburg means immersing yourself in the history of what only a completely intact medieval city has to offer.

Spring and autumn, as the climate is mild and rainfall is scarce.