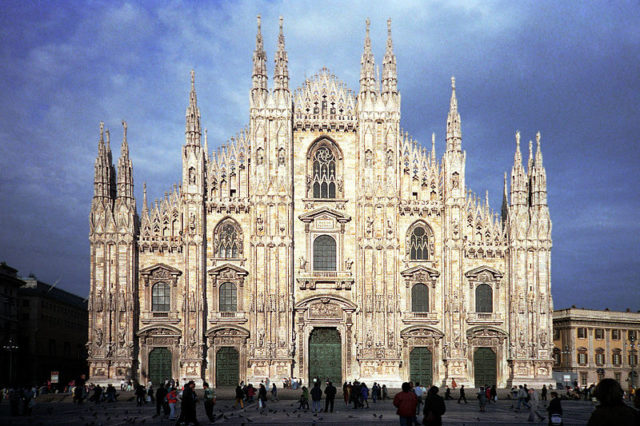 The 10 Largest Churches in the World

We all crave and eagerly wait for every trip we have planned. We wait for months for the time of going on a trip. But, we realize we are actually leaving when we leave our home and head to the airport. If you plan to go to Italy or live there, you know there are many airports, which connect the country with the rest of Europe and the world, shortening the distance and time needed to reach even the farthest destinations.

But do you know which are the busiest airports? If you plan to go there or live there and want to travel within your country, it’s a great idea to know which airports are the business ones. So, here’s the list of the Italian airports with the most passengers.

*NOTE: The data presented here is based on the data collected by the Airports Council International, last updated in 2019. This data takes into account arriving passengers, departing passengers, and those in direct transit.

Fiumicino is the first airport for passenger traffic with 43.532.573 passengers in 2019. It’s also one of Italy’s two international hubs and the main hub of Alitalia.

It has 4 terminals – T1, T2, T3, and T5, of which T2 is the smallest and T3 is the largest with 80 companies with national, European, and international flights land and depart.

It’s located about 32 km from the center of Rome, near the sea. From there, you can easily reach the center thanks to trains, buses, and taxis. It also has a large parking area.

The famous Malpensa airport comes in second place, with a traffic of 28.846.299 passengers per year. It’s the largest airport in Milan and one of the two Italian international hubs. It has two different terminals, Terminal 1 and Terminal 2, plus a terminal used exclusively for cargo flights called Malpensa Cargo City. Terminal 1 is the largest and is used by many companies, while Terminal 2 is only used by Easy Jet.

Malpensa airport is further from Milan than Linate airport and Orio al Serio airport. To be exact, it’s 57 km away, so you have to take a bus, taxi, or train to reach the city. If you travel by car, you can use one of the 5 large car parks, which hold up to 9.000 cars.

In third place, with a transit of 13.857.257 passengers, we find the Orio al Serio Airports, branded as Milan Bergamo airport. It’s about 50 km from Milan and 6 km from Bergamo. Also known as Il Caravaggio International Airport, it consists of a single large terminal, which has grown mostly due to the increased number of low-cost airlines serving the airport.

Due to being close to Bergamo, you can reach the city by bus or taxi, as well as the collective taxis. If you want to go to Milan, you can go by bus or taxi. There’s no train station at the airport, so if you want to travel by train, you need to reach Bergamo first.

Next, we find the Venice airport, which serves the city and entire Triveneto, a historical region in Italy. There are other airports in the area, such as Venice-Treviso, but this is the busiest one. It’s also the airport with the most national, European, and international flights. It consists of a single terminal, spread on 3 different levels. On the ground floor, there are check-ins from number 63 to 99 and arrivals. On the first floor, there are security checks and check-ins from number 1 to 62. The gates are divided between the two floors. On the second floor, there are VIP lounges, shops, and restaurants.

Venice Marco Polo is located on the mainland, 13 km from Venice, and is well-connected to the other cities of the Triveneto too. To reach it, you can use the bus, regular taxi or water taxi. There’s also enough parking space, both, for short-term and long-term parking.

With 10.860.068 passengers per year, in fifth place, we find the Naples airport. It’s the most important airport in southern Italy, with most passengers. Also known as Capodichino Airport, it consists of a single terminal, divided into two parts – an area for departures and an area for arrivals.

It’s located in the Capodichino district, just 5 km from Naples. Hence, you can reach the city by taxi or bus. There is no rail link available. If you travel by car, you can leave it at one of the numerous official car parks divided into short and long stops.

Fontanarossa is the most important Sicilian airport and the second-largest in southern Italy, after that of Naples. It currently consists of a single terminal where, both, arrivals and departures are located. But, the airport is undergoing renovations to be modernized and expanded. Eventually, there will be three different terminals, indicated by A, B, and C and the passenger services will be increased.

It’s located about 10 km from the center of Catania, which means you can reach it by bus or taxi. If you travel by car, the airport has three car parks – two for short stays up to one day and one for longer stays.

Apart from serving Bologna, this international airport also serves all the neighboring areas of the Emilia Romagna region and is well connected to several other cities. It consists of a single terminal, recently renovated and refurbished, to guarantee all passenger services. It spreads on two floors, with the arrivals and check-ins located on the ground floor and all controls and gates located on the first floor.

The airport is only 6 km from the center of Bologna and the best way to reach it is by shuttle bus. Alternatively, you can use the numerous taxis. If you travel by car, the airport has 7 official car parks, divided into short-term and long-term ones.

In eighth place, with 7.018.087 passengers, we find the airport of Palermo, in Sicily. It is the second-busiest airport in Sicily and the third in southern Italy. It consists of a single terminal spread on several floors. On the ground floor are the arrivals, while on the first and second floor are the departures. One of the floors is dedicated to check-ins and one to controls and boarding, where all the gates are.

The airport is located in the municipality of Cinisi, about 35 km from Palermo. To reach the city you can use trains, buses, and taxis. If you reach the airport by car, you can leave it in one of the 4 official car parks. For long term parking, the most convenient is parking P3.

It is the second airport in the city of Milan, after the most popular one, Malpensa, serving around 6.570.984 passengers per year. The airport consists of a single terminal, which includes, both, departures and arrivals, open 24/7, and all services, including businessmen and those going on a business trip.

The airport is located about 8 km from the center of Milan, which means you can easily reach it by bus or taxi. For those who travel by car and have to leave it at the airport, there are three official car parks and several low-cost car parks.

This airport has been named after Giovan Battista Pastine, a pilot who served during the First World War. It’s a low-cost Roman airport serving 5.879.496 passengers in the last year. It consists of a single passenger terminal, divided into departures and arrivals, all on one floor.

It is located about 20 km from the center of Rome and can be easily reached by train, bus, or taxi. It also has many parking solutions, both, for long-term and short-term stays.