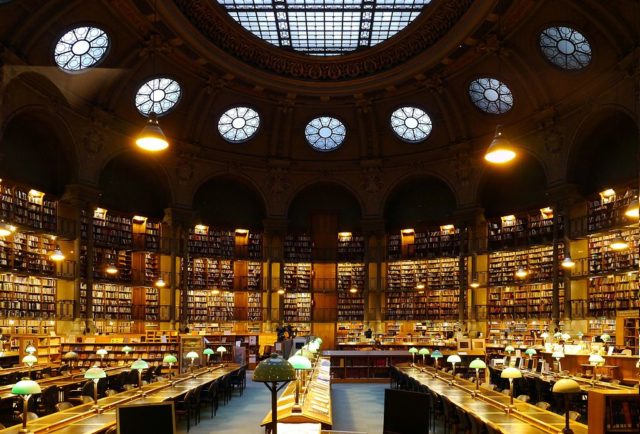 The 20 Most Beautiful Libraries in the World

Warning: this article isn’t suitable for those suffering from vertigo! We are looking at the highest bridges in Italy, a real nightmare to cross for those with acrophobia. Great engineering marvels, bridges have been useful, over the centuries, for providing connections between different places, crossing waterways, and simply facilitating the passage of vehicles and people.

They can be made in stone, iron, wood, or modern materials depending on the historical period. In addition to being very useful, some can also be valuable from an aesthetic point of view.

Well, we’ve already warned those afraid of heights, so let’s look at the highest bridges in Italy.

The arched bridge in reinforced concrete called Santa Giustina rises on the bed of the river Noce. At the time of its construction, and once completed, it was the tallest railway bridge in the world. The Trento – Malè railway line passes over it, in one of the points considered to be among the most spectacular of the entire route.

It’s the highest bridge of the A15 motorway, made of reinforced concrete and supported by several pylons, also made of concrete. Although not aesthetically pleasing, they have been doing their job of supporting the viaduct for over 35 years.

This viaduct seems assembled like a huge puzzle, putting together several pieces that fit together perfectly. It’s part of the A3 motorway and is located a few kilometers south of the largest Italian viaduct, which closely resembles it due to the extensive steel boxes straddling the over-140-meters-high pylons.

Built in the Frankenstein style, during the 1960s and 1970s, this Italian engineering gem stretches for 483 kilometers from Naples to the tip of Italy’s boot. Salerno – Reggio Calabria has the sad reputation of being a construction site that is always open as well as being perpetually congested and very dangerous. New tunnels, smoother and wider curves are planned to improve the situation. The largest bridge that will be included in this updated project will be Favazzina. The original project was the work of the famous engineer Riccardo Morandi and the new one includes a structure that will be parallel to the one present today.

Less famous than the nearby Italy viaduct, the Stupino is the tallest concrete bridge on the A3 motorway. The voluminous central pylon of the viaduct reaches a height of 135 meters and supports the two spans built using the cantilever method.

The Veglio-Pistolesa viaduct is an excellent example of a simple but effective Italian bridge. Inaugurated in 1968, it has a main pylon the base of which insinuates itself into a ravine rich in vegetation. Nicknamed “colossus”, this bridge has become the home of bungee jumps, the extreme discipline that took hold in the 1990s. The organization that takes care of it also organizes night launches to offer the fearless jumpers the feeling of falling into a real abyss.

Located at the Altopiano dei Sette Comuni in Veneto, more precisely, between the municipalities of Foza and Enego, the Valgadena viaduct allows the passage of a local two-lane road. Below it, there is a dizzying rocky gorge. The bridge was built to bypass a dangerous provincial road.

Better known as Costanzo bridge, this viaduct is located on Highway 115 South East Sicula. The valley crossed is that of the Irminio river, which is located between the Sicilian cities of Ragusa and Modica. The bridge is made up of a series of concrete pillars and some cross spans made of steel. The company Fratelli Costanzo SpA took care of its construction. The construction cost over 20 billion lire. When it was inaugurated, it was the highest bridge in Italy.

A work of the designer Giulio Krall, the Sacco bridge connects the two municipalities of Sacco and Roscigno in the province of Salerno (Campania) and is one of the highest single-arch bridges in Europe. The project had rather large construction costs, about 400 million lire, compared to the 185 million initially budgeted. The additional construction costs were necessary due to some geological problems following the start of the works.

Located about 16 km from Genoa, the Gorsexio viaduct is located near the Mediterranean coast, at the southernmost point of the A26 Autostrada of the Tunnels, bearing that name because of the over 20 tunnels present in the first 24 km. The bridge is famous for having the fourth tallest pylon in Europe.

Also called the Piave viaduct, this bridge is located between the municipalities of Pieve di Cadore and Perarolo di Cadore. It overlooks a very deep gorge where the Piave River flows. Before the construction of the bridge, the only way to go to Centro Cadore (which to reach, you need to cross the gorge) was to pass by the old and winding Cavallera road. The bridge is made up of three viaducts and a frame arch bridge. It’s the second-highest bridge on a state road in Italy.

In the 5th position, we find one of the most important road bridges of the entire peninsula. It’s an impressive engineering work as well as a valuable structural monument, one of the most significant in entire Europe. The bridge is made of steel and concrete and is located near the homonymous river. Its position marks the borderline between two regions: Abruzzo and Molise. During the first excavation work on the viaduct, a worker lost his life which is why, on May 2, 2011, the bridge was named Francesco Paolo Longo, in his memory.

It’s the highest viaduct in the Campania region and one of the highest in Italy. It was designed by the engineers Silvano Zorzi and Sabatino Procaccia. The structure of the bridge is in some ways very similar to that of the Sfalassà viaduct, located on the A3, and to that of the Piave viaduct. The three bridges are similar to each other in terms of the section and the methodology of approach to overcoming the obstacle. All three, actually, use the pushing portal arch system.

Sadly known for the dam disaster which happened in 1963, this dam bridge is not in use now. The accident was caused by a landslide from Mount Toc which fell into the basic and made the water overflow pouring into the town of Longarone taking 1917 lives. The fault of the disaster was found in the superficiality of the studies that preceded the realization of the work. In particular, the study of some elements that emerged in the course of geological studies, such as the friability of the slope of Mount Toc, was not thorough.

Also known as Bagnara bridge, this viaduct has a steel structure and is part of the A3 motorway. It’s the 3rd highest bridge in Europe and 20th highest in the world. Silvano Zorzi, Sabatino Procaccia, and Luciano Lonardo took care of the design. The bridge has also won the CECM European Award three times, the highest European recognition for major works. To date, it’s the tallest thrusting portal arch bridge in the world.

In addition to being the highest bridge in Italy, it’s also one of the most important Italian bridges in a full metal truss, the first with these characteristics. For its realization, ANAS launched a competition in which the engineers Fabrizio de Miranda, Carlo Cestelli Guidi, and Carmelo Pellegrino Gallo won. Until 2004, it was the highest bridge in Europe, then it was surpassed by the Millau viaduct in France. During the work carried out on the deck in progress in 2015, the 5th span of the southern carriageway of the viaduct collapsed. Unfortunately, there was a work vehicle with a worker on board in the collapse. The worker died instantly after jumping into the void of about 80 meters. This accident also caused not only the closure of the motorway towards the north but also an obvious series of tests to verify the static and dynamic state of the structure, which was definitively reopened to traffic in July 2016.