The 10 Most Beautiful Squares in Italy

When thinking of a hotel, we usually recall the old hotels where we’ve spent our childhood and teenage years during our holidays. They were immense, ancient, with a style that hadn’t changed over the years, a patterned carpet, and questionable colors. Long before motels and chains such as Holiday Inn were born, these hotels welcomed guests who wanted to stay for leisure and fun or business.

But these hotels were modern 20-30 years ago and, by no means, they are too old even now. There are much older hotels and guest houses, most of which have disappeared a long time ago. Still, there are some still standing despite all the years that have passed. And, we don’t refer only to old buildings that were converted into hotels but also to structures that have continuously operated for hundreds of years and even more than a millennium.

So, let’s dig into the past to find out the oldest hotels in the world!

And, if you are a history buff or just interested in exploring ancient places, you can consider a stay in one of these hotels that have stood the test of time.

It may seem like a fortress, but Hotel Stein was opened as a tavern and a guesthouse. In the 16th century, it was briefly famous for its homebrew, and from 1945 to 1950, it was occupied by the American troops. After the war, it started functioning as a hotel again and, today, it represents itself with somewhat kitsch interiors, such as zebra patterns, leather details, and shiny silk sheets.

Mozart, Goethe, and almost every Austrian king and noble, from Joseph II to Ludwig I of Bavaria, have stayed there. Today, the rooms are furnished in a modern style, but its history is visible in its thick walls, wooden ceilings, and stained glass windows.

This hotel is located close to one of the steepest passages of an important trade route and was built to offer weary wanderers a place to rest before resuming their journey. Initially, it was more extensive, but one of the owners, a gambling lover, lost half the building on cards. The rooms are simple and rustic, probably the same way they looked 634 years ago, while the food served remains plentiful and the atmosphere is familiar.

Located just outside the city walls, Al Cappello Rosso (eng. To the Red Hat) was opened to house and protect Jewish travelers. The law required them to stay here, for a maximum of three days. The building is located near the Bills Office, a government department that was in charge of registering people passing by and making sure they didn’t stay in the city longer than expected. Today, the hotel has a rather modern look despite its age.

The construction date of the building is still not clear even today, but the first news regarding its use as a hostel dates back to 1342. Its facade has remained completely authentic as well as the wooden beams. The rooms have been made more stylish and personalized with colorful chandeliers.

Originally a hospital, then a convent, and lastly a tavern, Hotel Interlaken was first listed as a guest house in 1323. Renovated in 1491, it was finally able to receive its coat of arms, which is still present on its facade. You can still see the remains of the original walls at the entrance, at the bar, and the restaurant.

The Pilgrim Haus should have been opened in 1304, which is the official date, but, definitely, you wouldn’t tell that from the Ikea-inspired decor or promotional material, which barely refer to its historical period. Located along one of the main Christian pilgrimage routes (the Camino de Santiago, eng. The Road of Santiago), it was built to accommodate pilgrims on their way to the sanctuary of James of Zebedee, also known as James the Greater, in Santiago de Compostela, Spain. 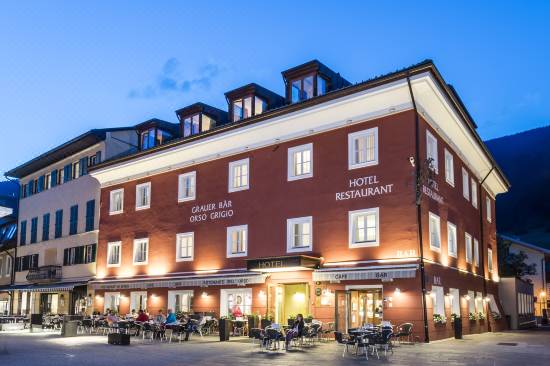 When this hotel in the Dolomites was opened as Grauer Bär (Gray Bear) in 1300, it was located in a scenic location in Austria. However, today it’s located in Italy because the province was annexed after the First World War. The hotel’s name stayed the same, only translated into Italian. It was built to offer accommodation to merchants, travelers, and noblemen who gathered in the city of Ronzone. Then, it was a famous commercial square that also housed a military hospital during the First World War.

It is reported that the building’s history dates back to the year 600, but it wasn’t used as a hotel until 1246 when it became part of the courtyard of the nearby Cathedral. Travelers and visitors of the Cathedral often gathered in the hotel to drink the famous Sanct Peter wine, since this place was also a well-known vineyard in the Ahr region, famous for its red wines.

6. The Old Bell Hotel and Restaurant

Although it claims to be the oldest hotel in the UK, we know it’s actually another Old Bell that is the oldest one. The construction of this building dates back to the 13th century and originally served as a guesthouse for visitors and dignitaries who went to Malmesbury Abbey. At that time, the abbey housed the second largest library in Europe and one of the country’s most important learning venues. The hotel has now been slightly modernized but there are still traces of the past, from the ancient stone fireplace to the old wooden beams, and the eight stone sarcophagi found in the basement.

Originally the Angel Inn, located on the road from London to Edinburgh, this hotel served as a hostel for the Brotherhood of the Knights Templar. It has hosted some kings including John of England, Richard III, Edward III, Charles I, and George IV, which makes the addition of the word “royal” to the name of the hotel justified and deserved.

The Olde Bell opened its doors in 1135 as a boarding house and carriage shed for those making a pilgrimage to the nearby Benedictine monastery. At the hotel, there is also a secret passage, still usable, which played a fundamental role in the Glorious Revolution (or Second English Revolution) of 1688, which overthrew the reign of King James II of England.

The oldest hotel in Europe is actually older than the town where it’s located since it has been built before Freiburg. Over the years, the hotel has survived the Black Death epidemics, witch hunts, peasant revolutions and uprisings, the Thirty Years’ War, and the First and Second World Wars. It first belonged to the French, then it had 51 consecutive owners, and it was intensely modernized and renovated. The hotel still bears the same name with which it appeared for the first time, in some documents dating back to the year 1387, and the cellar still preserves the original works of art and architecture.

Legend says that a deity commissioned a Buddhist priest to build this hotel on a hot spring with miraculous healing properties, which has yet to be discovered. The monk, who was apparently too busy to engage in a dimly-lit business such as hospitality, left the job to his disciple, Garyo Houshi, whose family has run the hotel ever since. The hotel is defined as “the perfect example of Japanese hospitality for lodging, service, and gastronomy” by a guest on the popular TripAdvisor site.

Nishiyama Onsen Keiunkan has been in business since 705, which makes it the oldest continuously operating hotel in the world according to the Guinness Book of Records. Even more impressive is the fact that the same family runs this ryokan throughout its 1,300-year existence. Built around a natural spring of hot water, the structure of this hotel is ancient, yet everything is designed to satisfy the modern traveler by offering an excellent mix of ancient Japanese customs and an elegant and contemporary design.