In neoclassical style, modern, or ancient; the creative mind of man, throughout history, has given life to theaters of truly immense aesthetic and functional beauty, which are perfect for different types of performances and with formidable acoustics.

Even with the limited technological means available at the time, the visual and auditory rendering of some theaters that have entered history is unmatched compared to contemporary constructions. And, this says a lot about their greatness and the skill of the people who built them.

The greatest architects have tried their hand at the construction of theaters, including Antonio Bibiena, Andrea Palladio, Aldo Rossi, Giuseppe Piermarini, to mention a few.

But, which are the most impressive ones?

Here are the 15 most famous theaters in the world!

The San Carlo Theater in Naples is the oldest opera house in Europe still active. The initial capacity of about 3,300 people has been reduced over the years for safety reasons. The works were completed in 8 months and the theater was an inspiration for all subsequent European theaters.

A baroque theater included in the list of UNESCO world heritage in 2012. An excellent example of Baroque architecture of the century, the theater was often used by Wagner, who lived in Bayreuth from 1872 until 1883. The stalls, devoid of armchairs, were reserved for dancing.

Fun fact: The original curtain was stolen by the Napoleonic troops passing through Bayreuth.

The Sydney Opera House is a true icon not only of the city of Sydney but also of entire Australia. It’s one of the most famous theaters on the planet, probably the most famous of all those in modern style. It is a UNESCO World Heritage Site since 2007.

For fans of classical ballet, the Moscow Bolschoi is a real cultural temple. Its notoriety is, in fact, due to the great tradition of its famous dance company, but this incredible public opera is also a place for theatrical performances and operas.

One of the most modern theaters in the world required a budget of approximately 500 million dollars for its construction. It is located opposite the Amalienborg Palace, along the harbor shore, and can also be reached by boat.

This is one of the 5 spectacular Fox theaters built by William Fox in the 1920s. It has three levels of seating and has been heavily used for film broadcasting. The exterior of the building is spectacular: it’s decorated with Asian motifs and at night it’s illuminated, which makes it visible from far.

A historic Rococo theater, it is one of the most beautiful and important in Europe. It boasts the premieres of some of Mozart’s operas, such as Don Giovanni and Clemenza di Tito, as well as Beethoven’s performance in 1796. Currently, it’s part of the National Theater.

Located in Lincoln Center, the Metropolitan Opera House is the largest in the world. It was built in 1883 by Cleaveland but was destroyed by a terrible fire. Then, it was renovated in the period between 1963 and 1966.

It is one of the most beautiful theaters in the world and home to the premieres of very important operas by Rossini, Bellini, Donizetti, and Verdi. However, the theater had an unfortunate history. It was destroyed twice by fires, which is why it was inevitably rebuilt and remodeled with the last reopening dating back to 2003.

Being one of the most important theaters in the world, this opera house saw numerous performances by Hendel. The current building is the third in chronological order; the first two were destroyed by violent fires in 1808 and 1856. The theater is home to the Royal Opera and the Royal Ballet.

Considered one of the most beautiful and important theaters in the world of opera, the State Opera of Vienna was built in the second half of the 19th century after having launched a competition between the best architects in Europe. August Sicard von Sicardsburg and Eduard van der Nüll won the competition and have created this masterpiece. The theater, equipped with a sumptuous staircase, was inaugurated with Mozart’s Don Giovanni. During the Second World War, the Staatsoper was completely destroyed and was reopened to the public in 1955.

Chosen as a French historical monument, its construction was interrupted several times due to the discovery of numerous water galleries. Its style is that of the Second Empire, with exceptional richness and splendid external decorations. The large stage can accommodate up to 450 artists.

This theater boasts the primacy of the largest opera house in Italy as well as in Europe. The building is truly monumental, taking an area of over 7,700 square meters. The hall is structured in a horseshoe shape and hosts 5 tiers of boxes.

The Teatro Alla Scala in Milan is one of the best-known and most important Italian theaters and the main opera house in Milan. Even today, there are some of the most representative operas and ballets of international signage. Built by Piermarini, this opera house underwent some renovations over the years, such as the much controversial construction project in the 2000s of the two “New Towers”. 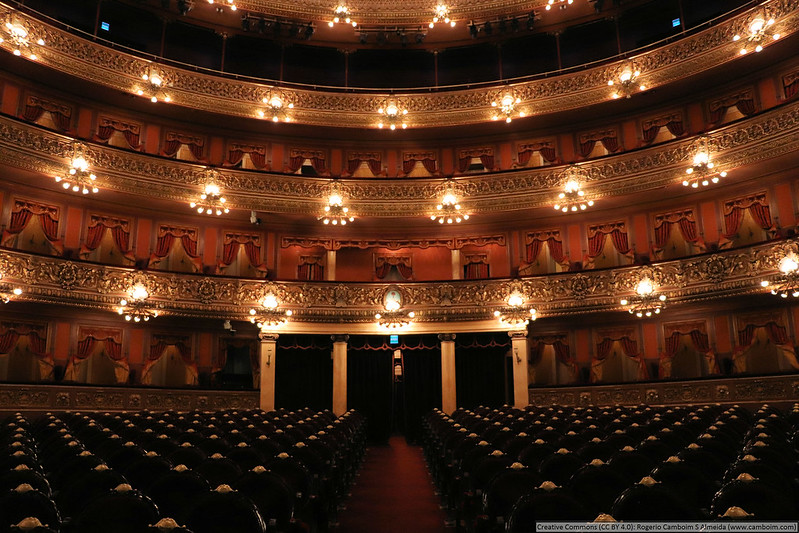 In the first place, we find the Teatro Colón of Buenos Aires, the most important opera house in the world. It is considered a real monument of theatrical and lyrical art and it’s the best theater ever in terms of acoustics. It expands on 8,200 square meters and is located near Avenida 9 de Julio, one of the widest avenues in the world.