When we need a few days or just a few hours of relaxation, there is no better choice than going to the spa. However, sometimes, spending time in these places is quite expensive and we can’t always afford this whim. Fortunately, there is a solution: there are numerous places in Italy where the spas are free. Obviously, you have to forget the modern establishments with changing rooms, services, shops, and all the other comforts that spa centers usually offer. But, you get all the beauty and natural benefits of thermal water to the body and the mind for free. From north to south, Italy offers free spas, so, let’s check out the 10 best free natural spas in Italy!

Location: Viterbo, Lazio
Directions: at Strada Bulicame, about 2.5 km from the city center, near the intersection between Strada Tuscanese and Strada Terme.

Named by Dante in a song of hell (you can read the passage on a stone specially placed to the left of the source), the Bullicame spas (bullicare = eng. boil) provides a tub of hot water and one of cold water, where you can dive at no cost.

Location: Caronte, Lamezia Terme (CZ), Calabria
Directions: use the Lamezia airport in Sant’Eufemia and then take a taxi; after about 6 km you will arrive at the crossroads in the “Bagni” area which marks the direction towards the thermal springs. By car, take the A3 up to the corresponding Lamezia junction, or the SS 280.

The free spas are located about 300 meters from the entrance to the paid establishment. You will find water that gushes at 39°C but also a cold waterfall that comes from the adjacent river. Unfortunately, being free and not managed by any organization or association, it’s not only crowded but also a bit dirty, especially during the summer; hence, the ideal would be to visit it at the beginning of the hot season.

Location: Viterbo, Lazio
Directions: at Strada Castiglione, about 8 km from the city center, use the SS Cassia coming from both Rome and Siena.

The free admission is currently under discussion because although the Bagnaccio Baths are free, they are managed by an association that takes care of them and asks for a contribution of €5 for a membership card. Waiting for the dispute over the legitimacy of this decision, you can take advantage of these spas at a very low cost. Visitors to this area can find hyperthermal (65-66°C) and hypothermal (23-29°C) springs, or choose to take advantage of the vapors released by insufflations.

Location: Ischia, Forio, Naples, Campania
Directions: from Forio arrive in the hamlet of Panza and, from there, continue to Sorgeto; you arrive in a small square from where 234 steps start.

The island of Ischia is famous for its thermal springs, as well as being a popular tourist destination. That’s why, spas, although highly sought after by people from all over the world, are very expensive. Fortunately, there are also free spas available to users. Going down the impressive 200 steps, at the thermal baths of Sorgeto, you can find hot water that reaches a temperature of 90°C when there is low tide. But beware of burns! Look for a spot where warmer water is mitigated by cooler water in the sea.

Location: Castiglione d’Orcia (SI), Tuscany
Directions: reach the town of Bagni San Filippo, park on the branch of the Provinciale 61 that crosses the town, and go up the river on a dirt path for about a hundred meters.

Called by the locals “White Whale” due to the enormous limestone formation the thermal waters have created with their flow, the St. Philip free baths are close to the course of the Fosso Bianco river, near the paid spa. In front of you, you will find a still, impressive, and enchanting waterfall where you can relax thanks to the thermal waters with a temperature of up to 48°C. At the bottom of the pools, you will also find the precious thermal mud which, once spread on the skin, performs a naturally smoothing action.

Location: Lipari (ME), Sicily
Directions: take the hydrofoil or ferry from Milazzo to get to the island; once there, choose the location with pools, stoves, and fumaroles you prefer.

These spas are not completely free but the price to pay is really negligible compared to the beauty of the island. Your contribution supports the company that takes care of the cleaning, surveillance, and maintenance of the spa areas to continue doing their job and keep this place a true paradise. The hyperthermal waters of the island are highly sulfurous and the muds and vapors are very effective natural thermal products for smoothing the skin, relieving joint problems, and treating respiratory diseases. 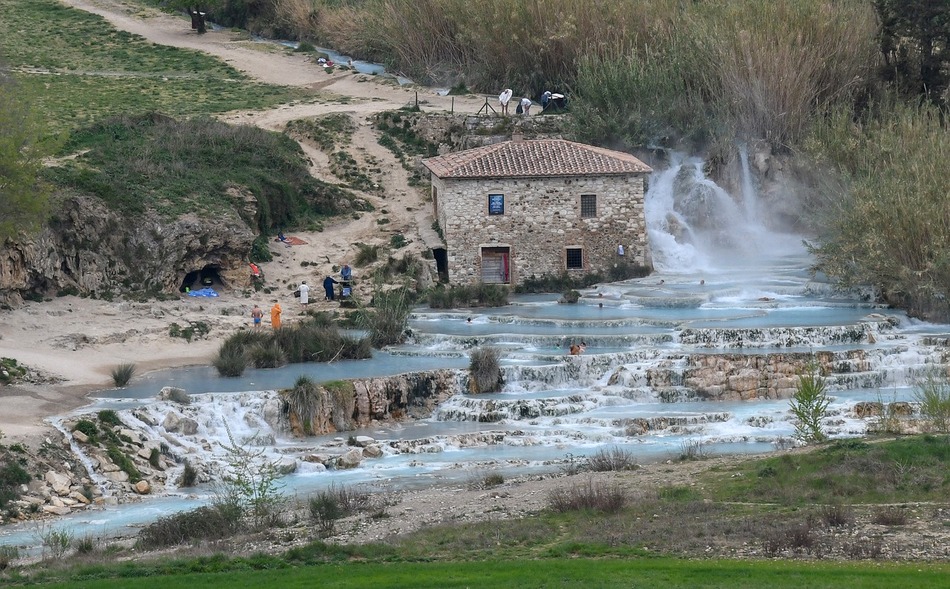 Location: Saturnia, Manciano (GR), Tuscany
Directions: take the Sp 10 that connects Montemerano to the village of Saturnia; when you meet a rather obvious bend, look for a small road (called via della Follonata) that leads directly to the Cascate del Mulino.

While looking for a little relaxation here, you can also savor and enjoy a beautiful naturalistic context within which these spas are inserted. You can bathe in the large limestone pools shaped by the flowing waters with world-known properties. The bar and restaurant near the car park is a convenient place to rest for those who want to eat or take a shower (for a fee). It’s also advisable to avoid weekends and holidays in order not to find too many crowds. The water of the springs flows at a temperature of 37°C.

Location: Petriolo, Monticiano (SI), Tuscany
Directions: take the Siena-Grosseto highway and follow the junctions with the indication “Bagni di Petriolo” which leads to the Sp 4, or the Provinciale di Petriolo. The free baths are after about 3 km, at the point where the provincial viaduct crosses the Farma.

These are the best known and most popular spas, right after those of Saturnia, not only in Italy but worldwide as it’s mostly visited by foreign tourists. Therefore, it’s best to avoid weekends, both, in high and low season. If you go there early in the morning, perhaps during the week, you can grab the best seats, which are right under the jet of thermal water in one of the limestone pools. In fact, since the paid establishment was built, the scope of the source has been significantly reduced. That’s why the Petriolo baths no longer live up to their celebrity, still are equally appreciated thanks to the fascinating naturalistic context (the baths are located in the heart of the Merse Natural Park and the pools overlook impressive ruins) and the “frigidarium-calidarium” effect obtained by passing from the warm waters of the thermal spring to the colder waters of Farma river.

Location: Fordongianus (OR), Sardinia
Directions: starting from the capital Oristano and entering the hinterland in the direction of Fonni and Barbagia along the SS 388.

A truly suggestive and enchanting scenery for these “almost” free spas. Although you have to pay a fee, it’s a very small sum and it’s totally worth it. The free baths are actually located in an archaeological thermal complex dating back to the 2nd century AD, from the Roman era. The springs that feed these spas are hyperthermal and flow at a temperature of 55°C, the waters are sulfurous and contain traces of chlorine, nitrous acid, and sulfuric acid. These characteristics make them ideal for the treatment of rheumatism and arthrosis, as well as for diseases of the respiratory system, skin, and female genital diseases.

Location: Valdidentro (SO), Lombardy
Directions: starting from Bormio, follow the directions for the Stelvio pass and turn towards the ski resort of Livigno. A short distance away there is a path closed from the circulation of vehicles: follow the path in the woods that runs along the stream and after a walkway overlooking the river, you can reach Leonardo’s pool.

The name of Leonardo is associated with these spas precisely because of the testimony that the Tuscan genius left the visit to these places in his works. The name of Bormio actually appears in its famous Codex Atlanticus. Why did Leonardo find himself passing through Bormio? He was invited to Valtellina by Ludovico il Moro, Duke of Milan, to carry out an inspection aimed at regulating the waters of the Adda river. The free baths collect the excess water that passes from the famous Bagni Vecchi (Old Baths) and Bagni Nuovi (New Baths) the paid establishments of the town.

Fun fact: Although it may seem strange, the waters of the Bormio baths were not as precious in medieval times as they are today, as they were used to wash the sheep. Unwittingly, the shepherds offered a great benefit to animal health!